Construction has started on Ponce City Market’s next phase, which will bring two 21-story residential towers and a four-story office building to the popular Old Fourth Ward live-work-play hub.

One of the towers will be called Signal House and offer 163 rental units for the 55+ community, while the other will be a hospitality-living building providing flexible stays ranging from one night to one year. The office component, 619 Ponce, will encompass 90,000 square feet of office space and 23,000 square feet of retail in a mass timber-loft structure. All three buildings will seek LEED certification and net-zero carbon emissions, according to Jamestown LP, the real estate developer and investor behind Ponce City Market.

“Since opening in 2015, Ponce City Market has served as a vibrant centerpiece to Atlanta’s Old Fourth Ward neighborhood and is among the nation’s preeminent examples of mixed-use developments,” Jamestown President Michael Phillips said in a press release. “We look forward to building upon that legacy of innovation, urban renewal and neighborhood connectivity as we embark on the property’s next chapter and set a new standard for dynamic mixed-use environments.”

Signal House will be on the Atlanta Beltline at North Avenue and include 3,300 square feet of ground-level retail. Apartments will range from one to three bedrooms and be outfitted with digital gadgetry aimed at the “non-digitally native demographic.”

“Signal House will cater to a 55+ community that wants the convenience of technology-enabled living without the friction points,” Phillips said. “Through multi-dimensional programming and technology interfaces designed for a non-digitally native audience, Signal House will give the 55+ community access to the kind of dynamic mixed-use environments typically reserved for younger generations.”

The hospitality-living building at the corner of Glen Iris Drive and Glen Iris Way will include 405 fully furnished units aimed at the “global nomad” by providing the flexibility of short-term rentals with the service of a hotel, according to Phillips.

“The line between Airbnb and hotels, short-term and long-term rentals, is blurring,” Phillips said. “The majority of people under 30 default to Airbnb and short-term stay rentals rather than hotels.”

The office building, 619 Ponce, will be at the intersection of Ponce de Leon Avenue and Glen Iris Drive and share a courtyard with the hospitality-living tower that will increase walkability between the Beltline, new spaces on Glen Iris and the main Ponce building. The cross-laminated timber used in its construction is more environmentally friendly than traditional office building materials like concrete and steel, Jamestown said.

Signal House is slated to open by the end of next year, while 619 Ponce and the flex-stay building are expected to open in 2024. 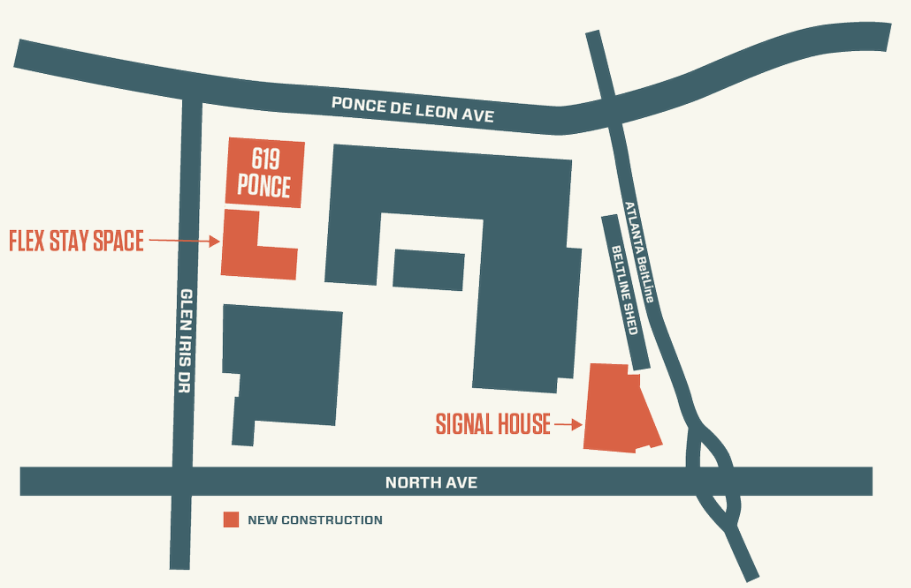