62% of Americans Have Almost No Savings That alarming statistic was the main finding of a Google Consumer Survey that GoBankingRates, a national website that tracks interest rates, recently conducted. Among the survey’s 5,006 respondents, 28 percent stated they have no money in their savings account, while 13 percent had less than $1,000 and 21 percent lacked a savings account entirely.

“It’s worrisome that such a large percentage of Americans have so little set aside in a savings account,” said Cameron Huddleston, a personal finance expert and columnist for GoBankingRates. “It suggests that they likely do not have cash reserves to cover an emergency and will have to rely on credit, friends and family, or even their retirement accounts to cover unexpected expenses.”

Savings are particularly important for Gen X and Millennial buyers, of which 72 and 83 percent, respectively, rely on savings to make a down payment on a house; yet, as the GoBankingRates survey demonstrates, those two generations are particularly problematic when it comes to saving accounts.

Here is a graph that demonstrates the generational divide: 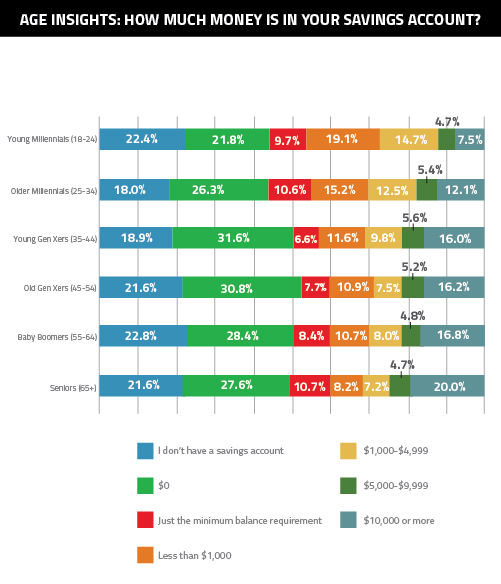 The State of Savings in America

The results of GoBankingRates’ survey seem dire, but they are very much in line with similar surveys from increasingly reputable sources: