4 Important Details about New Construction in 2016

What will the new construction marketplace look like in 2016? The Census Bureau released its latest report on new construction this morning, and as usual, the agency’s analysis had far-reaching implications on where the new construction markets are heading in the coming months.

Here were the four main takeaways from the report:

1. A Strong Year for Starts –Last year was a strong one for new construction, and that activity bodes well for the 2016 market. According to the Census Bureau, there were more than 1.11 million housing units started in 2015, a 10.8 percent increase over 2014. Multifamily starts, meanwhile, were even stronger, rising 12.5 percent over last year.

2. Permits Point to the Future – Further evidence of new construction’s strength came in building permits, which directly point to future construction activity. In 2015, there were nearly 1.2 million permits issued, a 12 percent increase over 2014.

3. A Multifamily World – Those building permit numbers drive home what had been a recurring theme of our new construction coverage in 2015, that being the growing prominence of multifamily housing. Consider this chart from economist Jed Kolko, which analyzes the market share of multifamily in housing starts: 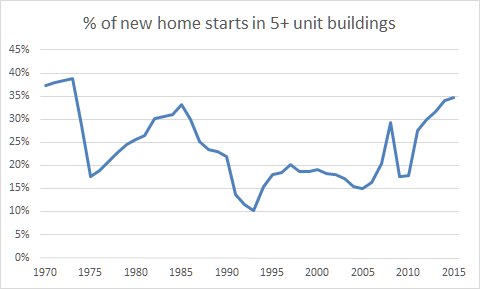 Since 2010, multifamily construction has skyrocketed, and in 2015, it comprised 35 percent of all housing starts – the highest level since 1973.