The consumer equation is messy – expectations are up, attitudes towards the current market are down, and overall, confidence is on the rise, according to The Conference Board’s March Consumer Confidence Index.

Using 1985 as the index’s baseline, where a score of 100 equates to “normal,” the Board reported an improvement in overall confidence from February to March, with the index jumping from 94 to 96.2.

“Consumers’ assessment of current conditions posted a moderate decline, while expectations regarding the short term turned more favorable as last month’s turmoil in the financial markets appeared to have abated,” she said. “On balance, consumers do not foresee the economy gaining any significant momentum in the near-term, nor do they see it worsening.”

What remains improved are consumers’ attitudes towards homebuying, which show marked improvement from the same time last year. 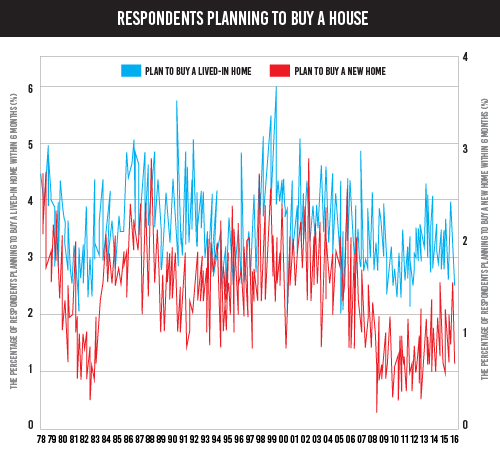 Historically, the percentage of consumers planning to buy homes – whether new or lived in – mimics the early ’80s. The similarities aren’t entirely surprising, considering the parallels of geopolitical strife (i.e. the Iranian revolution and the 1979 energy crisis helped cause two recessions [with help from U.S. monetary policy]). 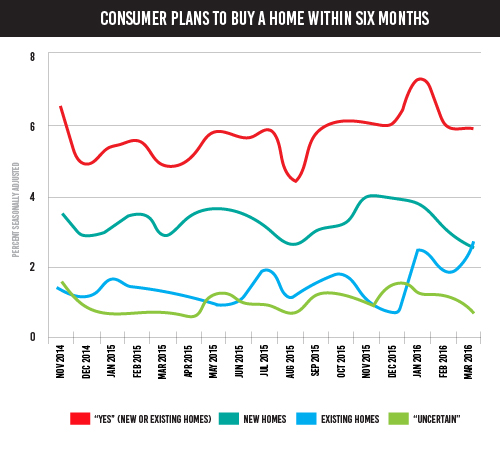 But since late 2014, expectations for homebuying have been on a slow upswing. The latest measure shows a year-over-year gain of 0.5 percentage points – though the amount remained flat from February to March.

Further evidence of growing confidence in potential homebuyers came from Owners.com, which found in a survey of 1,000 people that 80 percent were confident in this year’s “homebuying environment.”

According to the website’s president, Steve Udelson, the findings show that “heading into the spring homebuying season” consumers have “a positive outlook.”