The latest S&P Dow Jones Indices shows that in June 2017, home prices around the country continued to increase, marking a year of gains. Prices jumped 5.8 percent over May 2017, according to the data released Aug. 29. The 10-city composite showed increases of 4.9 percent and the 20-city composite revealed a 5.7 percent year-over-year gain.

“The trend of increasing home prices is continuing,” said David M. Blitzer, managing director and chairman of the Index Committee at S&P Dow Jones Indices. “Price increases are supported by a tight housing market. Both the number of homes for sale and the number of days a house is on the market have declined for four to five years. Currently the months-supply of existing homes for sale is low, at 4.2 months. In addition, housing starts remain below their pre-financial crisis peak as new home sales have not recovered as fast as existing home sales.”

Blitzer added that rising prices are making homes less affordable, but other economic factors are solidifying the market, including decreasing unemployment, more jobs, and increasing wages and salaries. Mortgage rates, while up slightly since the end of 2016, also remain relatively low at less than 4 percent, according to the report.

The cities with the biggest gains were Seattle, Portland and Dallas. Atlanta saw home prices increase more than 5 percent over June 2016. 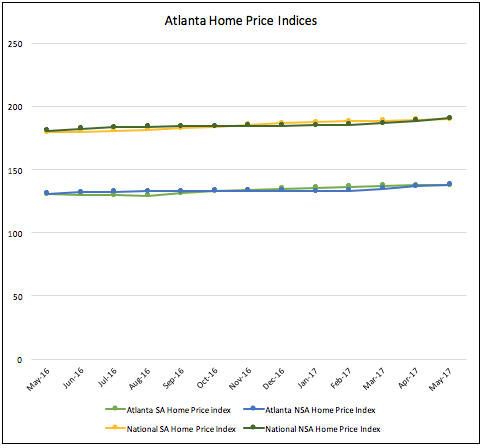