For-sale-by-owner (FSBO) homes accounted for only 8 percent of recent home sales, according to the National Association of Realtors (NAR). This marks an all-time low in FSBO home sales since NAR began recording the data in 1981.

Between 2001 and 2008, the share of FSBOs hovered steadily between 12 and 14 percent. Meanwhile, the percentage of recent home sellers who used an agent continues to rise, hitting an all-time high of 89 percent in the last year.

“What we do see is that sellers are working with agents to help market their homes to potential buyers, sell it in a specific time frame and price the home competitively,” she said. “Pricing the home competitively is really important for sellers today, especially because everything is rapidly changing with prices.”

“Knowing how to price that home so they can sell quickly is important, and that’s difficult for FSBOs to do,” she added.

In a survey conducted for the report, home sellers said that the biggest obstacle they encountered when selling their own home was getting the right price (15 percent). Other challenges included selling the home within a timeframe (13 percent) and understanding/performing paperwork (12 percent).

Despite the decline in FSBOs, the median sale price of these homes rose slightly, increasing from $185,000 to $190,000 last year. The median price of a home using an agent during that sales process stands at $250,000.

The NAR reported that FSBO homes sold faster on the market than agent-assisted homes: Fifty-eight percent of FSBOs sold in less than two weeks.The median age of an FSBO seller is 55 years old, and 74 percent of these homes were sold by married couples that have a median household income of $103,100. 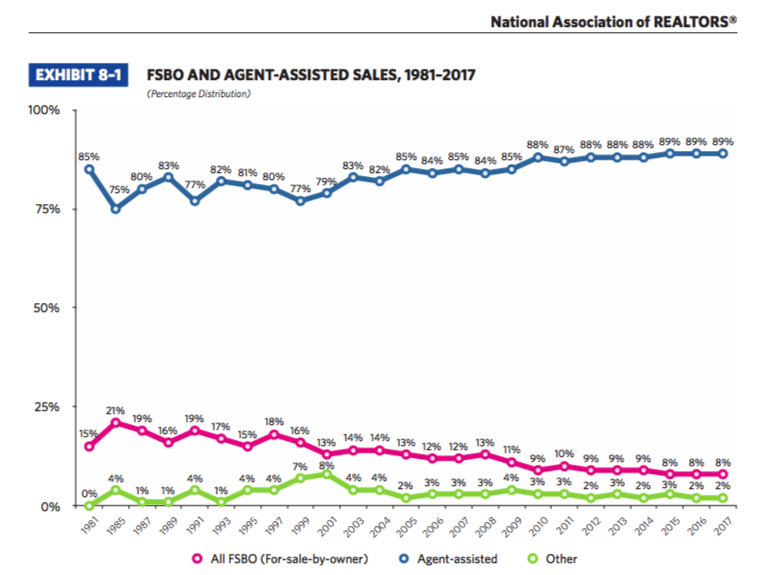