Pending home sales up with supply increasing across the nation The worst of 2018’s inventory crunch may be coming to an end, according to recent data from the NAR’s pending home sales report.

Nationally, the pending home sales index (PHSI) saw a 0.9 percent uptick in June, jumping from 105.9 to 106.9. Although contract signings are up from last month, the PHSI is still down 2.5 percent on an annual basis. For the sixth month in a row, pending home sales have lagged behind year ago levels.

Lack of inventory in the previous months have resulted in sharp price increases, but Lawrence Yun, NAR chief economist, says June’s PHSI numbers may be good news for buyers.

“Home price growth remains swift and listings are still going under contract at a robust pace in most of the country, which indicates that even with rising inventory in many markets, demand still significantly outpaces what’s available for sale,” Yun said. “However, if this trend of increasing supply continues in the months ahead, prospective buyers will hopefully begin to see more choices and softer price growth.”

But predictions for the rest of the year still show the market getting worse before getting better. Yun forecasts a 1.0 percent drop in existing-home sales in 2018 and a 5.0 percent increase to median existing-home prices.

“The positive forces of faster economic growth and steady hiring are being met by the negative forces of higher home prices and mortgage rates,” added Yun. “Even with slightly more homeowners putting their home on the market, inventory is still subpar and not meeting demand.” 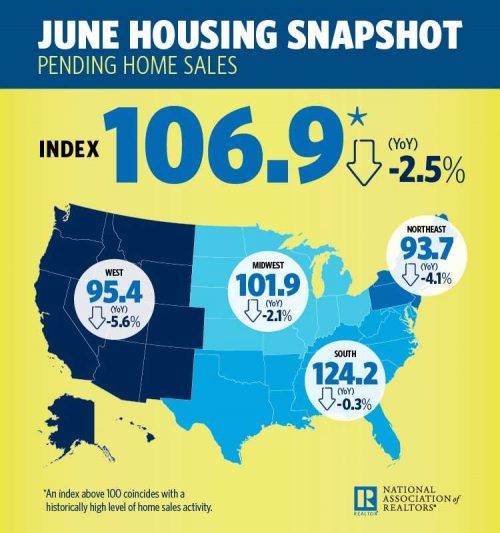