No, Renters are Not Buying Homes Anytime Soon

All the evidence suggests that renters are not rushing to the homebuying sphere. 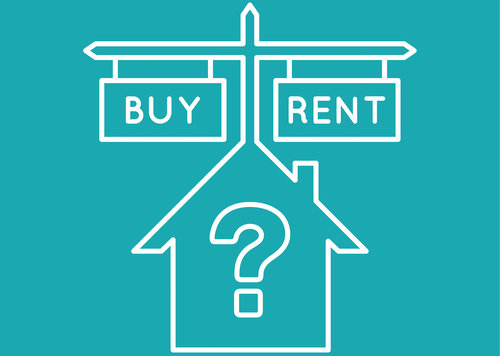 Concept of choice between buying and tenancy. House symbol with pointers and the question

It would seem to be a perfect environment for homebuying. Not only are rents rising by considerable amounts, but relative to the costs of homebuying, it currently requires a very short span of time to break even on a home purchase.

So with market conditions so ideal, renters will inevitably flock to the housing market and buy, right? …not necessarily. In fact, a new study by John Burns Real Estate Consultants has come to a contrary conclusion: “[T]he response of some of the largest apartment REIT operators is an unhesitating no time soon.”

Renters in No Hurry to Buy

Every quarter, John Burns tracks the percentage of residents who, among the 520,000 rental units in publicly traded REITs, move out and purchase a home. During the height of the housing boom, roughly 1 in every 5 renters was moving out and buying a house, and that share peaked at nearly 25 percent in 2004, when the nation’s homeownership rate also peaked.

Since then, it’s been all downhill, and in the last seven years, the share of buying renters has actually fallen below its historical average of 17 percent; in 2014’s fourth quarter, in fact, that share was just 14.7 percent, while homeownership was at its lowest level since the mid-90s.

Here’s a graph showing the decline: Here’s the strangest thing about John Burns’ data – it concerns renters on the higher end of the spectrum. We’ve written before how renters, especially Millennials and those on the lower end of the pay scale, often rent more out of economic necessity than preference, and that the shadow of the downturn prohibits them from buying. The subjects of John Burns’ study, though, pay an average rent of $1,652, or 31 percent higher than the national average.

So what could be prohibiting those capable consumers from buying a home? There are a number of factors likely contributing, including: a simple desire to rent, rather than own; foreclosures, which damaged credit scores for hundreds of thousands of would-be buyers; tight lending standards; and low savings.

Regardless of the reason, if even those renters are showing no inclination to buying, that means we may still have quite a ways to go before housing truly recovers.