Median sales prices up more than 10 percent in Atlanta Homes in Atlanta continue to fly off the market, causing rising prices across the area, according to RE/MAX Georgia’s October Housing Report.

Cobb County had the largest jump in median sales prices, with a 14 percent increase to $265,200 in October. Clayton County also saw a significant jump of 11 percent to $133,000.

The number of days homes spent on market stayed steady from September, but is down four days from last year to an average of 46 days in October. Currently there is a 2.8 months’ supply of homes, which is down significantly from 3.7 months in October 2016 and 3.4 months last month. This is also less than the national average of 3.3 months.

“A lack of inventory remains a significant strain on our local housing market as the months supply is now less than three months,” said John Rainey, vice president of RE/MAX Georgia. “It’ll be very interesting to see what happens locally over the next couple of months as we enter the traditional slow season.” 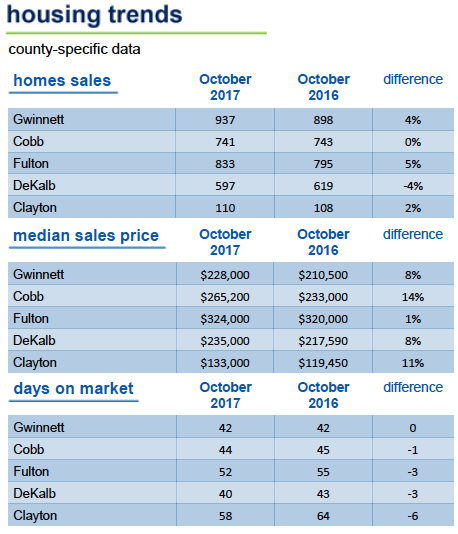