Following a very active hurricane season, the number of early-stage mortgage delinquencies increased in October to 2.3 percent, up from 2.2 percent in October 2016, according to CoreLogic’s latest monthly Loan Performance Insights Report. However, the number of mortgages in some stage of delinquency accounted 5.1 percent of all mortgages, down 0.1 from October 2016 and the lowest October amount since 2006.

CoreLogic analyzes all stages of delinquency to keep track of mortgage performance. Gauging rates of early-stage delinquency is critical in knowing the health of the mortgage market, and CoreLogic’s key findings include:

“After rising in September, early-stage delinquencies declined by 0.1 percentage points month over month in October. The temporary rise in September’s early-stage delinquencies reflected the impact of the hurricanes in Texas, Florida and Puerto Rico, but now the impact from the hurricanes is fading from a national perspective,” said Dr. Frank Nothaft, chief economist for CoreLogic.

“While the national impact of the recent hurricanes will soon fade, the human impact will remain for years. For example, the displacement and rebuilding in New Orleans after Hurricane Katrina extended for several years and altered the character of the city, an impact that still remains today,” said president and CEO of CoreLogic, Frank Martell. “The reconstruction of the housing stock and infrastructure impacted by the storms should provide a small stimulus to local economies. This rebuilding will occur against a backdrop of wage growth, consumer confidence and spending in the national economy, which should continue to provide a solid foundation for real estate demand in the storm-impacted areas and beyond.” 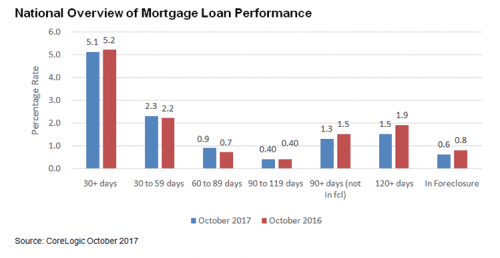