For the third consecutive month, pending home sales rose slightly in December, according to the National Association of Realtors.

The Pending Home Sales Index, an indicator based on contract signings, rose to 110.1 in December, an increase of 0.5 percent from 109.6 in November. The index is now 0.5 percent higher than it was a year ago.

“Another month of modest increases in contract activity is evidence that the housing market has a small trace of momentum at the start of 2018,” Yun said. “Jobs are plentiful, wages are finally climbing and the prospect of higher mortgage rates are perhaps encouraging more aspiring buyers to begin their search now.”

These positive indicators are not guaranteed to lead to a stronger sales pace. Throughout the country, buyers are still restricted by record low supply levels. Tight inventory has driven prices up, especially at the lower end of the market.

2017 was the sixth consecutive year that prices advanced at or above 5 percent. Continued imbalances in supply and demand across the country led to a price jump of 5.8 percent last year.

Yun predicts that existing-home sales and price growth will be moderate in 2018, largely due to the impact of the tax law is expected to have in high-cost housing markets, including the new caps on mortgage interest deduction and state and local deductions.

Below are NAR’s 2018 home price projections across the country. 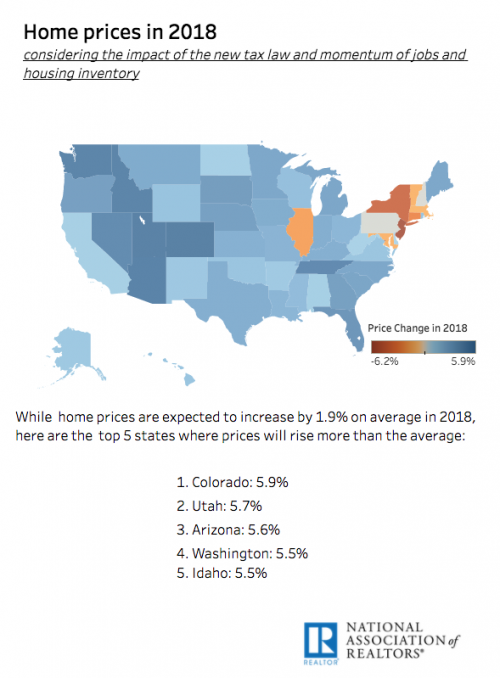 “In the short term, the larger paychecks most households will see from the tax cuts may give prospective buyers the ability to save for a larger down payment this year, and the healthy labor economy and job market will continue to boost demand,” said Yun. “However, there’s no doubt the nation’s most expensive markets with high property taxes are going to be adversely impacted by the tax law.”

In the Northeast the Pending Home Sales Index dropped by 5.1 percent in December to 93.9, and is now 2.7 percent lower than it was a year ago. The Midwest experienced a 0.3 percent decrease to 105.0 in December, though still 0.3 percent above the index of December 2016. 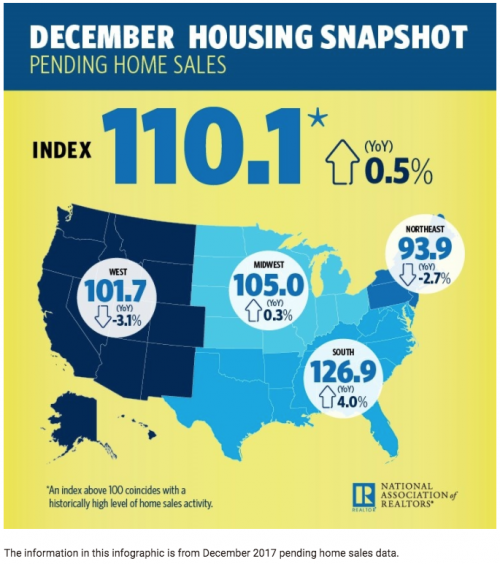