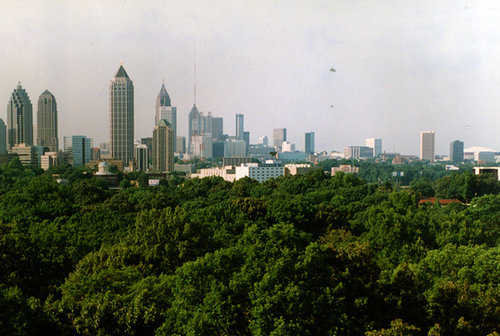 Patrick Malloy Cos., a Gwinnett developer, wants to build 258 homes for seniors on top of Summit Chase County Club golf course in Snellville. The development would cause the course to reduce its size, making it a nine-hole course. Malloy is seeking permission to build the development from Snellville officials.

The proposed senior living community would take about 73.575 acres of land from the golf course. That land, which is near Rosebud Road and Temple Johnson Road, is currently zoned for parks and recreational uses, but Malloy wants it rezoned for low-density residential use, according to city documents.

Developers said in their proposal to Snellville officials that they believe the new housing will be of benefit to what would be left of the golf course, as well as a nearby church.

Ashton Woods is developing new townhome and condos, all with an English Arts and Crafts-style architecture, that will be located near the Mercedes-Benz USA headquarters.

Called Aria North, the townhomes and for-sale lofts are located near Abernathy Road, just west of Ga. Highway 400 in Sandy Springs. According to a press release, the development is designed to merge “the excitement of the city and the serenity of the hillside.”

Banyan Street Capital, along with Greystar, has secured the air rights and construction financing for Ascent Peachtree, a 29-story, $125 million apartment tower above the parking deck at 161 Peachtree Center Ave. Construction should start in the next few weeks.

The Eastside Tax Allocation District granted the project a $9 million loan in exchange for promising that 70 of the 345 units would be reserved for workforce housing renters (those earning 80 percent or less than the area’s median income).

The project is focused on filling the residential vacancy in the downtown market at a sustainable rate.