Dotting your I’s and crossing your T’s: avoiding issues after closing 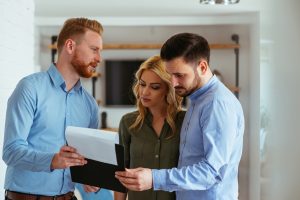 There is a recipe for disaster involving agents, buyers, and sellers that every agent aims to avoid. Chicago Real Estate Attorney and first-time homebuyer instructor Ranj Mohip calls it “Post-Close Nightmares.”

When the seller doesn’t disclose history, the buyer doesn’t tell full plans for the property or the agent doesn’t ask enough questions, Mohip usually gets a call.

Mohip recalls the woman who fell in love with a condo and spent all her money to land the unit. She learned after moving in that the darling 95-pound Mastiff she’d owned since he was a puppy, would not make the cut. The homeowners association board had a 25-pound limit on pooches and sent her a letter to get rid of the dog.

Heartbroken, the woman tried rallying support from her new neighbors. She sat outside her home waiting for other dog owners to appear and gave them a sensational letter written by Mohip, with a picture of her dog as a pup. In the end, she was able to keep her dog, paid a small fine and had limitations on when she could bring the dog in or out of the unit.

All this could have been addressed with early questions before the sale, said Mohip. “Now you are negotiating from a point of weakness,” he said.

Getting the details before the close is essential to getting the keys to a home without any static.

Asking the client their plans for the home, making them aware of deed or condo advisory board restrictions and insisting on surveys, inspections, title searches, building code violations, property fines and insurance are all essential in avoiding most problems, said the attorney.

There are things the buyer, the seller, and the agent can do to prevent post-close nightmares, said Roush, who trains agents to do it right the first time as yet another way to get referrals and repeat business.

Buyers and sellers should always hire a Realtor for representation, close at a title company, get title insurance and always get a residential service contract, said Roush.

But even when you think everything is done, “buyers should always do a final walk-through before closing and have repairs done by the seller inspected again by a licensed inspector,” said Rousch.

“Sellers should hire only licensed contractors or service providers in the specific trade to complete repairs negotiated with a buyer,” continued the productivity coach.

To protect yourself and your client, always get everything in writing, in clear and specific emails. And, as the coach noted, loyalty to a client should never trump one’s ethical and legal responsibility to do the right thing, obey the law and urge your clients to do the same.

“Work only with pre-qualified buyers and sellers who are willing to listen to your professional advice. Be prepared to walk away from (fire) a client who is wanting to do something unethical or illegal.”

Atlanta Realtor Torrence Ford recommends protection for buyers and errors and omissions insurance for real estate professionals. “For 14 years I’ve been using buyer protection. If you have a valid claim, that will protect you. Other companies will insure against mold and give you a guarantee. We work with companies that will stick their nose out,” said Ford, owner of Re/Max Premier.

Despite his efforts, Ford has had to bite it. He remembers selling a million dollar house on a short sale for $600,000. “After the closing, they went back and the signature lights were gone, the speakers were ripped out and the inspector missed a microwave not working.”

The sellers had no money and the buyer wouldn’t take care of it so Ford said he would replace the microwave himself. “We didn’t realize it was more like decor and had an $800 part missing. I had to eat that and get the contractor out and pay another $1500. But that’s what you have to do to keep the client happy,” said Ford.

But what about when clients don’t listen?

Mohip had a client from Florida who was eager to spend $2 million in cash for multiple condos in Chicago because the client had plans to rent them out as short-term rentals but did not disclose that information. Mohip gave him the paperwork to read but the client didn’t read that leases under nine months were not allowed.

“He overpaid because he thought he’d make it up monthly. A one bedroom in some of these condos can rent for $1500 a month and with $150 a night Airbnb rent you can get up to $4500 a month. But he was stuck,” said the real estate attorney.

Mohip also recalls a couple of clients who fell in love with a property but Mohip recommended they not buy it because there were no permits for the work done on the property.

“They were like, no, we want it. Their agent told them to drop me and get another attorney because I wasn’t pushing the deal through. I said I don’t think your agent has your best interest at heart, but it’s all about your commission. They closed and there were multiple problems,” said Mohip. He was friends with the owners but they loved the property more and went with the agent’s recommended attorney and closed the deal. They quickly learned that since no permits were approved, workmanship was shoddy and their floors buckled in the basement because a moisture barrier was never installed and pipes were bursting because vents weren’t cut out for the furnace.

“I really tried to tell them, this is not the deal you are looking for and if you do, you’ve got to get the price way down to pay for repairs. I’m putting a lot at the feet of the agent. That buyer could have said, ‘I still want it.’ You can’t protect people from themselves,” said Mohip.

Getting matters checked out and being serious about the results is important, said the attorney.

But inspections are not guaranteed.

“Most home inspections, if you miss something, the remedy is, we’ll give you back your inspection fee. So $300 back for a $5,000 problem is not the greatest return.” said the attorney.