Opinions are not defamatory, but facts are: How to fight back against a bad online review 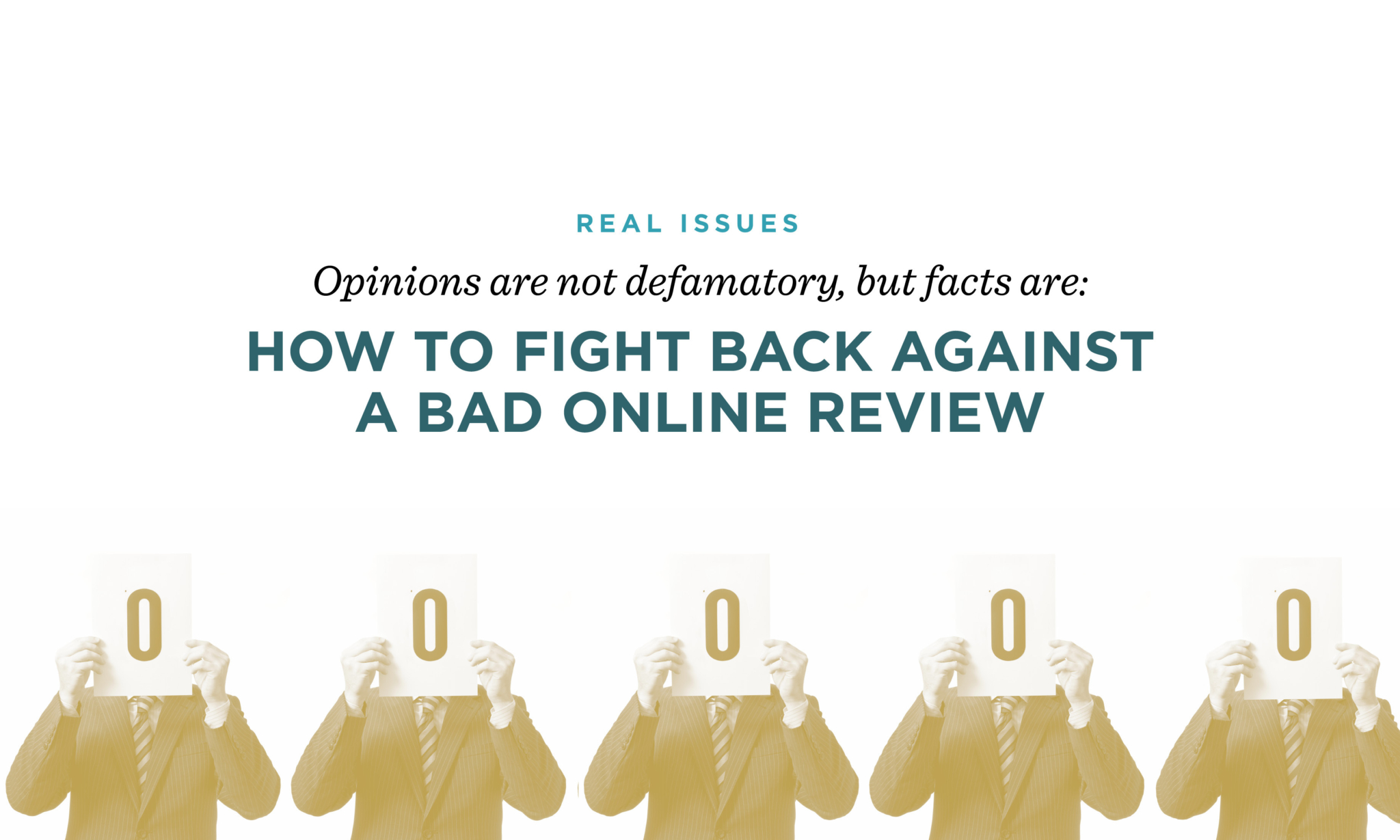 Buying a home is one of the most significant financial decisions a person will ever make, and if something goes wrong during the process, those involved — like their real estate agents — can suffer the consequences, as there is not much to stop someone from venting online. Dealing with these events quickly and effectively can be make-or-break situations for many agents, whose entire livelihoods are often based on their reputations.

“It’s really, really critical, because once you get a negative review, it tends to multiply, so you need to deal with it right away,” Houston-based defamation attorney and real estate broker Paul Sternberg said. “It is critical for an agent to be aware of that, because residential real estate is an emotional transaction. This is the biggest investment most people will make … and when people get emotional, they write things that they later might regret.”

“I’ve been through this where one negative review, while false, brought my ranking down significantly to where even flagging it personally resulted in it remaining,” she said. “The frustrating aspect is that if a negative review is received, even if false allegations, it is extremely difficult to have it removed.”

Sternberg, who wrote the book, “The Guide to Internet Defamation and Website Removal,” in 2019, has several go-to steps for addressing situations like these.

First of all, an agent needs to understand the problem. Why is the person leaving the negative review? Gaining an understanding of a person’s motivation is the first step an agent should take.

“Opinions are not defamatory, but facts are,” he said.

Second, an agent should find the person and ask them to remove the negative opinion. Despite the commonly held belief, when it comes down to it, the internet is not particularly anonymous, so finding out who to contact — privately at first — is not a problem in most cases.

“If an agent does receive a negative review, my suggestion is to immediately reach out to the person who wrote it to see if there is a way to remedy the situation,” he said. “People sometimes write the review in the heat of the moment and will often adjust or take down a review if they get a chance to talk through it with the agent. …In many cases, the person who wrote the review may have thought you were someone else and mistakenly posted it on your profile. Connecting with them can usually fix this.”

A cease-and-desist letter threatening a lawsuit can also be surprisingly effective, Sternberg said, but he cautioned that an agent needs to weigh the benefits and the risks of a confrontation before engaging and know exactly what he or she plans to do if they proceed.

“You need to look at it and decide whether it’s a fact or an opinion, whether you want to go after them or you don’t, because if you go after them, they may post more negative things,” he said. “Do you call the person up and ask them to take it down? Do you offer them a discount on their next purchase or sale? What do you do in order to alleviate the situation?”

If those steps do not work, Sternberg recommends something akin to crowd-sourcing. Ask loyal customers to write honest but positive reviews. The truth is the strongest weapon, he said, as people can smell dishonesty, which should always be avoided.

“Personally, I believe the best solution to this is consistency,” Roop Harpe said. “If you’re continuously asking clients for testimonials, the truth usually shines through. If you have 20-plus positives and one negative, the general consumer, hopefully, is able to decipher what is factual.”

Finally, Sternberg said, always publicly respond to negative reviews, but cool down for a day or two before doing so, and have others review the response before posting it. Tell the poster you are sorry they had a poor experience but that your other feedback has been positive.

“If it’s bad, and it’s a subjective opinion, and not defamation stated as fact, then say something along the lines of, ‘Thank you for the feedback. While I always strive to exceed expectations, there are times when mistakes happen. I hope that we can work together in the future so I can demonstrate my commitment to my clients and to continuous improvement,’” Kristen Prinz of the Prinz Law firm in Chicago said.

Sternberg agreed, noting that there is no need to be defensive, and definitely avoid antagonizing the reviewer.

“Just be honest,” he said. “Something like, ‘I’m so sorry you seem to have had a poor experience, but we have consistent A-grades for cleanliness in our restaurant.’”

In today’s market, most buyers and sellers begin their real estate process through browsing online before ever contacting an agent, which heightens the impact negative reviews can have.

After responding to the review, consider offering the person a discount or a follow-up appointment to discuss the issue further, Sternberg said.

He noted that due to federal laws, there is little legal recourse in asking an online platform to remove the review.

“There is not much you can do to get it down from the platform,” he said.

Still, Prinz said, it could be worth a try.

“If the statements are false and defamatory, report the review to the platform and notify them of the ways in which the review is false and misleading,” she said. “If you are not a repeat complainer, they will likely take your concern seriously and may even remove the negative review.”

Google categorizes real estate as a “your money or your life” industry, meaning it treats the content with high importance, since it affects people’s finances and well-being, said Christophe Tayon, marketing director with Erase Technologies LLC, a Miami firm that specializes in helping people remove defamatory online content.

A negative review can affect a Realtor’s or a real estate company’s ability to be found in search engine results, Tayon added. As a result, Realtors should be proactive in curating reviews that mention money issues and especially reviews with the words “scam” or “fraud.”

Tayon agreed that it is worth asking an online platform to remove negative reviews.

“The faster you act, the better chance you have at successfully removing the review,” he said.

He added that it is easier to have a review removed if it violates the website’s guidelines, and some platforms will remove a review without notifying the author.

Tayon also recommended responding to positive reviews, as well as negative ones.

“If anything, they’ll know you’re responsive and that you care about your reputation,” he said. “There’s a growing expectation for brands to be conversational, not just transactional. Great brands get rewarded for it.”

In the end, the best approach is to fight fire with water. Engage with the person, but do not attack, Sternberg said.

“An agent or broker’s reputation is obviously the most important thing,” he said. “It’s becoming more and more of an issue because everybody now has the capability of writing their own opinions online. I think people really need to be aware of how devastating a bad reputation on the internet is.”

Is it too easy to become a real estate agent?

Getting started is easy; moving forward is hard, particularly for Black agents

RPAC is always asking for money. Where do those dollars go?

See every National Association of Realtors political contribution since 2018