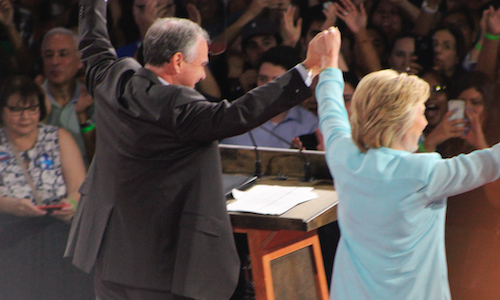 The presidential election is mere months away, and so far the conversation on the campaign trail seems to be limited to wages, terrorism, crime and bickering. But what about housing?

In 1984, Kaine took on his first case recommended by Housing Opportunities Made Equal of Virginia, Inc, otherwise known as HOME. In it, Kaine defended a young woman who had been turned away from an apartment because of her race. He said that case “made a huge impression” on him.

Could he spur the national conversation about housing this election cycle has been missing?

That remains to be seen, but below is a look at four of his cases, selected by the Housing Opportunities Made Equal of Virginia, Inc., or HOME, in honor of his selection as Clinton’s running mate. Each represents a notable legal victory.

When HOME began investigating Nationwide Mutual Insurance Company in 1996 on suspicion of discrimination, the group was already making history. No firm in the history of the U.S. had taken an insurance company to court of homeowners insurance discrimination. After finding “stunning evidence” of discrimination – including evidence of racially profiling to identify “target markets” and labeling every ZIP code with a substantial minority population as “undesirable,” among other egregious examples – the organization asked Kaine to join a team of lawyers to help bring the case to trial. Nationwide outmatched the group in terms of resources, but after a two-week trial in Oct. 1998, a Virginia Circuit Court ordered Nationwide to pay HOME $500,000 in compensatory damages and $100 million in punitive damages; the largest civil rights verdict in U.S. history. Unfortunately, the Virginia Supreme Court later threw out the verdict on the grounds that HOME lacked the standing to sue. However, the court reconsidered its decision and agreed to rehear the case, but before the trial could commence, HOME and Nationwide reached a $17.5 million settlement.

This 1987 case was the first to be tried on the basis of discriminatory advertising, and it set a precedent by having been brought under the Fair Housing Act. The story is that GSC produced a series of brochures advertising their apartment complexes, and among the 300-plus people featured, only six were minorities. Of those, only two were used to promote the properties. The other four were featured only in the context of being on a bus not directly related to the apartments being advertised. During its investigation, HOME also discovered what it describes as a “smoking gun”: a cache of GSC records containing marked up photos of a swimming pool directing designers not to include black swimmers. Kaine was HOME’s local counsel for the case and his victory lead to additional discriminatory advertising cases and a trend of more diverse realty advertising.

Denied on the grounds of race

Another case settled in 1987, this one involved a black professor who was denied an apartment because of her race. Her name was Okainer Dark, and she taught law at the T.C. Williams School of Law, University of Richmond. When Dark’s application to rent was first rejected, the would-be landlord told her it was because the unit had just been rented to another occupant. The truth was that the apartment was given to a white student of hers who applied minutes after her. Professor Dark discovered she had been denied the apartment on the basis of race through her student. When the student had applied, the landlord asked what color Dark was. When he found out that Prof. Dark was black, he said, “I can’t rent to those people.” Kaine took (and won) the case on the recommendation of HOME.

Denied many on the grounds of race

King Properties was a large landlord of rental properties in the early ’90s, and it was caught using race as a deciding factor in approving applications for certain properties. HOME again went to Kaine to file suit on its behalf alongside two other plaintiffs – former employees who alleged they’d been fired for protesting discriminatory policies. The compensatory and punitive damages sought by the plaintiffs totaled more than $8 million, but the ultimate settlement reached was confidential.