Atlanta ranks in the top 20 on Schroders Global Cities Index Atlanta was ranked by Schroders Global Cities Index for being a prime global location for real estate. Coming in at no. 17, Atlanta is one of 18 American cities listed in the top 30 by Schroders.

The index utilized a number of factors to identify the most “economically vibrant cities” including the population age 15 and over as a way to gauge demand for goods and services, median household income, retail sales and gross domestic product. The index also factors potential future growth into its calculations and local university rankings.

“We see universities as being critical in powering city economies,” Tom Walker, the co-head of global real estate securities at Schroders, said. “Knowledge-based hubs are growing in economic strength with a positive knock-on to real estate markets in those locations.”

Out of those categories, Atlanta ranked highest in retail sales (no. 11), followed by population (17), university rankings (19) and reached no. 20 for both household income and GDP.

According to Forbes, the index is used by “wealthy, global real estate investors and by institutional firms looking for the best long term value for fixed asset investments.”

Atlanta has been gaining attention from a number of sources for its growing economy. Forsyth County was recently listed as one of the top counties in the nation for incoming investments. Atlanta was also ranked as one of the best cities for new graduates to start a career. The expanding economy is leading toward a significant increase in population as experts are estimating it will become the sixth largest city by 2046.

See the rankings of all 30 cities below. 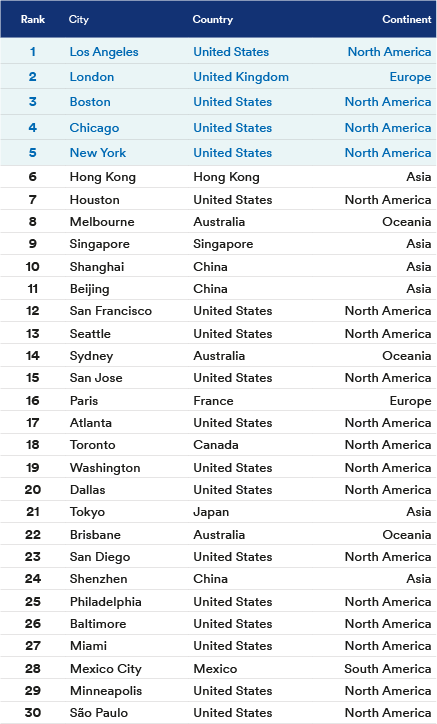