With just one month left in the year, it’s clear that the dominant characteristic of the 2017 housing market has been low inventory. While that’s resulted in higher prices and fewer sales overall, one thing is clear: People are still selling and buying homes. So who are they?

In an effort to figure it out, the National Association of Realtors recently released its 2017 Profile of Home Buyers and Sellers, which surveys people who bought or sold homes in the 12-month period from July to June.

The lack of inventory and increasing prices posed a challenge for many, especially first-time homebuyers, who nabbed a 34 percent share in the market this year, down 1 percent from last year — the fourth-lowest share since 1981. According to NAR, the average share for first-time buyers is 39 percent.

“The dreams of many aspiring first-time buyers were unfortunately dimmed over the past year by persistent inventory shortages, which undercut their ability to become homeowners,” said Lawrence Yun, NAR chief economist. “Solid economic conditions and millennials in their prime buying years should be translating to a lot more sales to first-timers, but the unfortunate reality is that the nation’s homeownership rate will remain suppressed until entry-level supply conditions increase enough to improve overall affordability.”

So who is buying?

Single women are making their purchasing power known, making up an 18 percent share of the buyer market — the second-most common buyer type after married couples at 65 percent. Single women also are buying more expensive homes than single men, according to NAR.

Meanwhile, unmarried couples accounted for an 8 percent share of the market, just ahead of single male buyers, who made up a 7 percent share.

Other study highlights include: 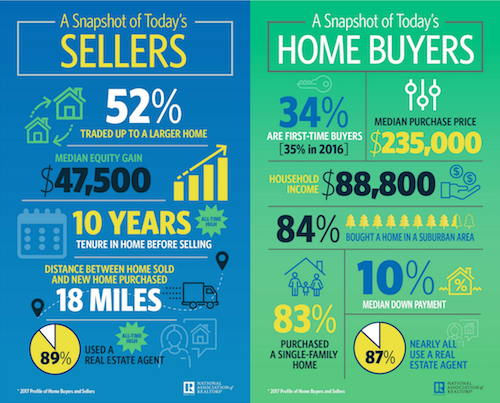