No matter who you are or what you believe in, your own seemingly-insignificant preferences shed some light on the type of home you prefer. Whether you’re a single woman with a dog or a dad who is glued to his iPhone, your traits, characteristics and hobbies reveal what you look for in a property, sometimes without you even knowing it.

Redfin compared and contrasted what different types of people consider when looking for a home. More than 1,000 buyers were asked which elements of a home they found most desirable and which they thought were expendable, and those choices were pitted against two opposing groups of people to determine trends of preference.

Women seemed to care much more about the various types of home features than men. For the most part, women cared more about the exterior and interior appearance of a home, such as the presence of an outdoor deck or patio and how many bedrooms and bathrooms were inside. Women also preferred homes that were close to good schools and located in safe neighborhoods.

Outdoor maintenance was more of a male preference, however — 5.1 percent were more concerned with exterior upkeep, despite more women prioritizing how it looks. Nonetheless, details about cost, resale value, and taxes and insurance costs were a much higher priority for women.

Predictably, outdoor features and space were far bigger concerns for dog owners than for cat owners. Decks, patios, big back yards and fences were invaluable to buyers with pooches, and they also stressed the importance of square footage. Surprisingly, cat people didn’t seem to care as much as dog people about how close their homes were located to good schools or how the interior was laid out.

Considering they have more people to look after, parents undoubtedly had more specifications for home features than non-parents. Particularly, parents seemed to place more value on privacy and protection — 9.1 percent more preferred having outdoor fences compared to non-parents, and 4.8 percent more wanted their homes to be located in safe neighborhoods. They also cared more about the age of the property and if it was located near a good school, though young people are increasingly growing more interested in purchasing homes near good schools for the optimal resale values that will follow later on.

Overall, iPhone users cared way more about the amenities in and around their homes than Android users. Pools were favored far more by Apple lovers, as well as houses with up-to-date appliances already installed. iPhone users also showed preference for homes that are centrally located and near good schools, whereas Android users weren’t as picky.

In one of the most irreverent comparisons, Redfin also measured the differing preferences of Marvel and DC fans. Good schools, safe neighborhoods and housing costs were valued much higher by Marvel fans than DC fans, but a higher percentage was also more inclined to prefer modern kitchens. In terms of outdoor protection and privacy, however, DC fans placed much more importance on having fences than Marvel fans did. 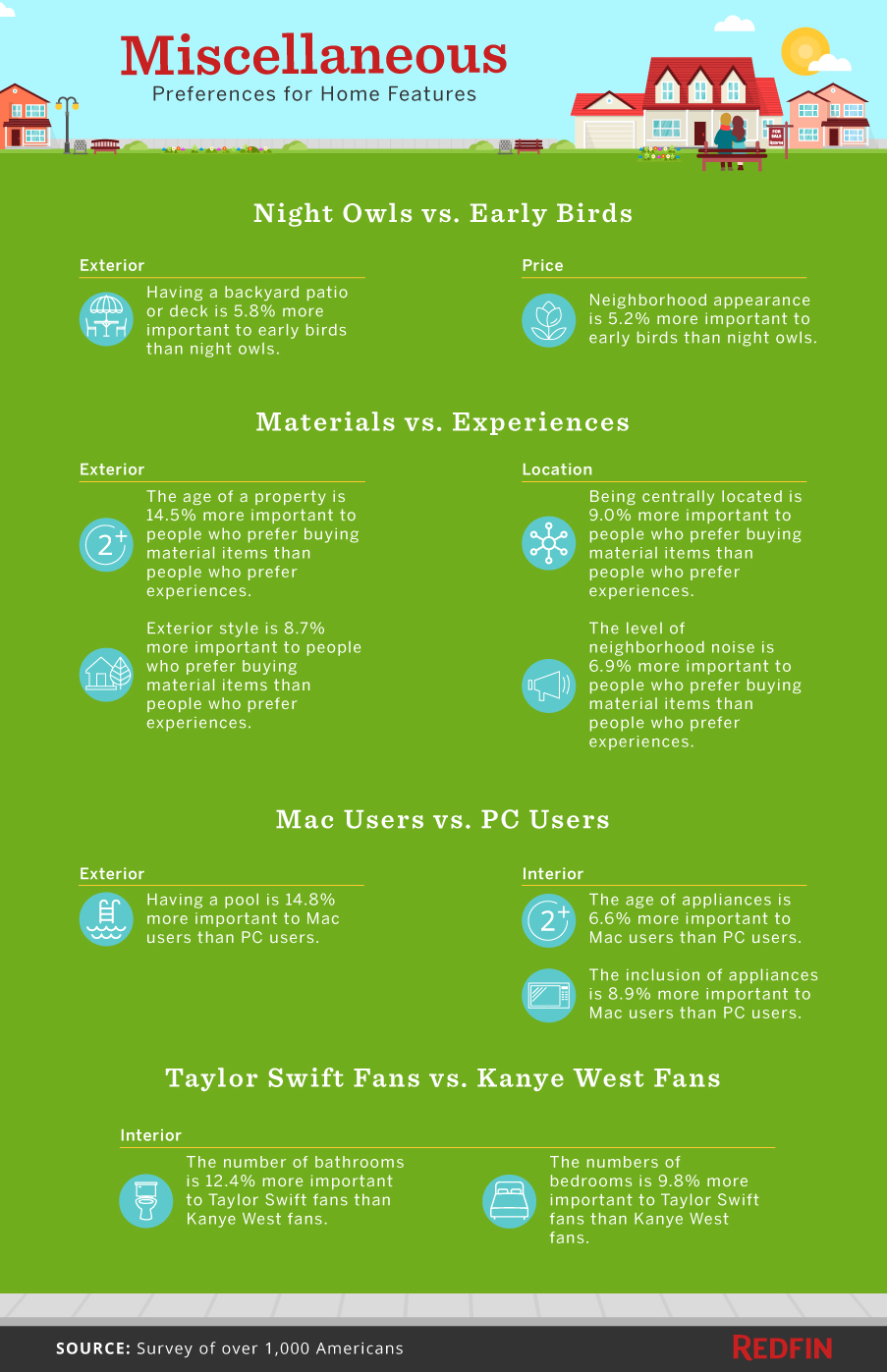