Zillow recently released its October 2017 Market Housing report showing that the median U.S. home value stands at $203,400, a $12,500, or 6.5 percent, increase since October of last year. This marks this 15th consecutive month that home values have increased by at least 6 percent. This is about double the standard rate of market value increase, which has stood at about 3 percent since January 2013. The report even stated that more than half of the nation’s major cities have homes that have value more than prior to Great Recession.

While value in the home market increases, inventory continues to diminish falling 11.6 percent from October 2016.

“We are in the midst of an inventory crisis that shows no signs of waning, impacting potential buyers all across the country,” said Zillow Chief Economist Dr. Svenja Gudell. “Home values are growing at a historically fast pace, and those potential buyers want to get in the market while they still can. But with homes gaining so much value in just one year, buyers – especially first-time buyers – have to set aside more and more money for a down payment just to keep up with them. Unfortunately, there’s just not enough homes for sale, and demand will continue to drive prices higher until we reach a better balance between supply and demand.”

The homes that are seeing the fastest growth are the ones of lower value. Nationwide, the medium value for the bottom third of all homes was $118,200, an 8.4 percent increase from October 2016. The typical value of homes in the top third rose only by 3.1 percent to $358,900. 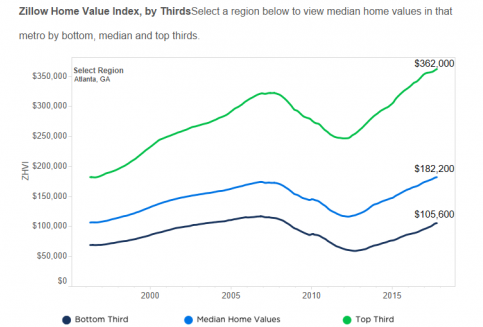