Zillow: Homeowners spend less of their income on mortgage payments than they did historically Low mortgage interest rates, which keep monthly payments down despite rising housing costs, mean homeowners are spending less of their income on house payments today than they did from 1985 to 2000. In Q3 2017, homeowners in Atlanta spent 26 percent of their income on mortgage payments, compared to an average of 19.1 percent between 1985 and 2000. Mortgage affordability reached its peak in Atlanta in September 1981 at 43.5 percent.

Though homeownership is not necessarily the most ideal option for all, it can mean lower ongoing payments than renting.

Today’s younger generations maintain traditional views when it comes to the value of owning a house. Young people want to be homeowners, but as the price of homes continue to rise, first-time buyers find the initial down payment to be a barrier. Those buying a home for the first time have to save more than $100 a month toward the cost of a down payment just to contend with escalating home prices. Although low interest rates make for relatively affordable monthly mortgage payments, the majority of renters point to the initial down payment as the major obstacle preventing their purchase of a home.

Rent on the rise

While mortgage payments today require a smaller percentage of a homeowner’s income, rent affordability has worsened nationwide. Stagnant income growth coupled with the continued climb of rent prices demand that an increasingly large percentage of a renter’s income will go toward making rent payments.

Today the median U.S. rent consumes 29.1 percent of the median monthly household income, versus 25.8 percent in 1985 to 2000. With a larger share of income going toward rent payments, saving for the initial down payment on a home becomes a greater challenge for renters hoping to become homeowners in the future.

“In most markets, current renters are at a disadvantage compared to years past because paying the rent takes up a much larger share of their income than it did before,” said Zillow Chief Economist Dr. Svenja Gudell. “For many people, that can mean less cash to put toward paying off student debt, building an emergency fund, or saving for retirement. For those hoping to buy a home, it could be a significant part of their down payment. For parents, it could mean additional childcare or a family vacation. This is another example of how much worse rent affordability has gotten.” 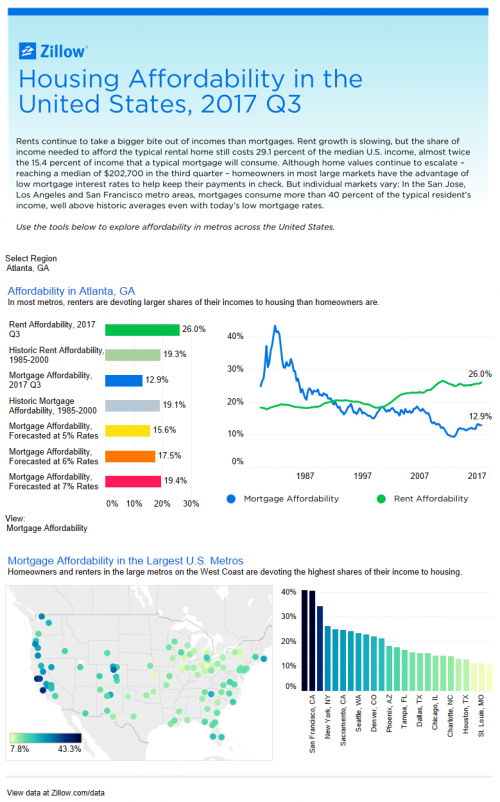