In 2018, home sales, housing construction and house prices are all likely to increase modestly, according to Freddie Mac’s January 2018 Outlook.

Home sales are forecasted to reach 6.35 million in 2018, up slightly from 6.17 million in 2017. Housing construction is expected to reach 1.3 million starts, and housing prices are predicted to increase by 5.7 percent.

The tax reform bill signed this past December could impact the housing market, as some of the tax advantages of owing a home have been deflated due to the increase in standard deduction and the decrease of the mortgage interest deduction. Incentive to buy a home instead of rent will dwindle given this fact alone, but when the influence of higher after-tax incomes and other larger economic factors are considered, the direct affect of the tax bill on the housing market may be relatively modest. Rate increases are expected to occur gradually, thus housing market activity will maintain momentum.

However, should the tax reform bill bring about greater than anticipated gains, or should inflation grow more than is predicted, mortgage interest rates could see a spike. The housing market would then suffer a substantial and almost immediate negative impact.

“Starting off the year, things are looking pretty good for the U.S. economy and housing markets. Mortgage rates are low, economic growth has accelerated in recent quarters, and housing is coming off its best year in a decade,” said Len Kiefer, deputy chief economist of Freddie Mac. “Although housing markets have been improving year-after-year for nearly a decade, there’s still room for improvement. We forecast moderating growth in U.S. housing market activity through the next two years.”

Despite the positive economic growth expected in 2018, homebuyer affordability will decline, which will potentially slow down housing market activity. The predicted 2.5 percent income growth is not likely to produce income gains that can contend with increasing house prices. In recent years, home prices have risen nearly 7 percent annually, while incomes have grown between 2 and 3 percent, which in turn decreases affordability.

The National Association of Realtors’ Housing Affordability Index, which measures the median family income necessary to qualify for a conventional mortgage on the median-priced home, has been declining since its peak in 2012; however, it has yet has not fallen below the historical average. This trend indicates that eventually housing market activity will be slowed as affordability drops. 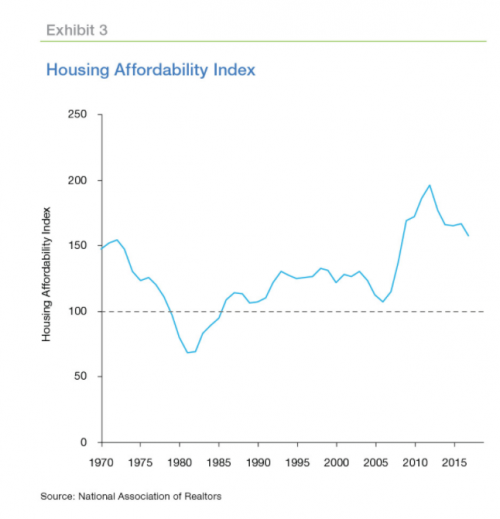 Affordability is a major obstacle for young adults who aspire to become homeowners. The housing market is banking on the notion that millennials will one day form households and purchase homes at rates close to historical averages. But standing in the way of today’s young adults are the high cost of living and high student debt, paired with modest income growth.

Though the homeownership rate for households under the age of 35 rose 1.4 percent from 2016’s third quarter to 2017’s third quarter, those in the industry should not assume that millennials will move the housing market.