Singles aspiring to become homeowners require patience before they can fulfill this element of the American dream, almost 11 years’ worth, according to a new Zillow analysis. To afford a 20 percent down payment on the average U.S. home, a single homebuyer must save for 10.8 years.

Finding an affordable home in today’s competitive housing market is becoming increasingly challenging for all homebuyers, but is particularly difficult for single individuals who, on average, require an additional six years of saving beyond those needed by a couple. Married or partnered couples are looking at about 4.6 years of saving for a down payment.

Using home values and income data from Census, Zillow assessed the time it would take for an individual compared to a couple, saving 10 percent of their income each year, to afford a 20 percent down payment on the median-price home. Single homebuyers, often limited by a smaller budget than couples, end up restricted to the most in-demand share of the housing stock, of which they can afford less than half of available homes.

Over the past year, the number of homes for sale across the country has dropped nearly 11 percent, with an 18 percent decline in the least expensive homes, hitting single homebuyers especially hard. Only 45 percent of the housing stock are homes affordable for a single homebuyer. A married or partnered couple can afford 82 percent of all homes. The most the average individual buyer can afford is a home priced at $176,100, which is less than the national median home value. Couples can afford a home worth more than twice that, at a maximum of $412,736.

In the Atlanta metro area, single homebuyers with a median household income of $40,000 must save 8.3 years to be able to afford the down payment on a home. Couples with a median household income of $87,000 can afford a home after 3.8 years of saving. For singles in the Atlanta area, 60 percent of housing stock is affordable, compared to 90 percent for couples.

“Nearly two-thirds of Americans agree that buying a home is a central part of living the American Dream, but for unmarried or un-partnered Americans, that dream is increasingly out of reach,” says Aaron Terrazas, Zillow senior economist. “Single buyers typically have more limited budgets, which means they are likely competing for lower-priced homes that are in high demand. Having two incomes allows buyers to compete in higher priced tiers where competition is not as stiff.” 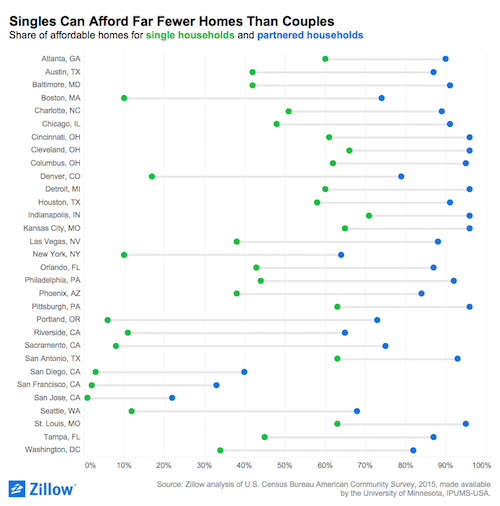