This March, the market saw an increase of 8.9 percent in median sales price from a year ago, achieving the highest rise in price in over four years, according to Redfin. The median home sale price in March was $297,000 in the 174 markets that Redfin tracks.

Small inventory, price increases mixed with a strong buyer demand makes for a highly competitive market. Homes for sale decreased 11.9 percent year-over-year and sales decreased 3.7 percent during the same time. While the number of homes newly listed for sale in March fell 5.6 percent compared to a year ago suggesting a decline in seller enthusiasm, the typical home went under contract in 43 days, eight days faster than any March on record.

“Sellers are slow to list this year and we aren’t seeing enough new construction homes to fill the gap,” said Nela Richardson, Redfin chief economist. “If we don’t see the new listings number turn around next month or a pickup in new housing starts, inventory will be a persistent drag on sales for the remainder of the year.”

Homes last month sold 23.9 percent above their listing price, increasing from 22.3 percent in March of 2017. One in five homes that sold in March went under contract within two weeks hitting the market, compared to 18.4 percent last year. 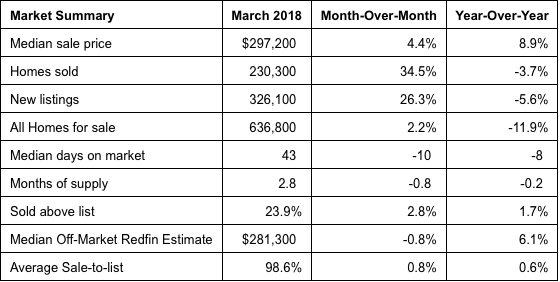