With the latest tax plan that is expected to give Americans a larger tax return, many plan to spend their tax cuts on larger houses and home renovations in 2018, according to a new report from Zillow.

Zillow estimates that both renters and homeowners will put in about $40 billion into the housing market. Of the $40 billion, it’s estimated that about $13.2 billion will go towards buying or renting larger homes, while the other $24.7 billion will be invested into home renovations.

The increase of money put into the housing market comes after the Tax Cuts an Job Acts increased the 2018 after-tax incomes. On average, taxpayers are now receiving $1,610 tax cut this year, according to the Tax Policy Center.

The housing market has continued to see price increases over the past year, exceeding 6 percent year-over-year for the last 22 consecutive months, with the median home price to reach $213,300 in March. This is 8 percent higher than where it reached in March 2017.

Similarly to years in the past, Americans are still estimated to spend most of their tax cuts, about $62.6 billion on to invest into savings or pay off debts, according to the survey. 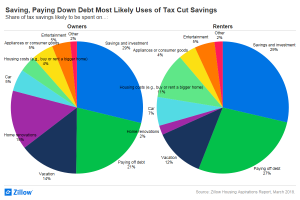 The Zillow Housing Aspirations Report also found data on how Americans would spend a raise in salary from a survey. The salary raise is compared to the amount of money Americans receive from the tax cut. 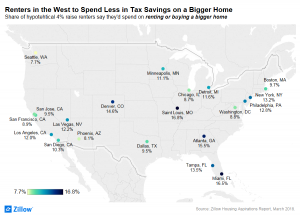