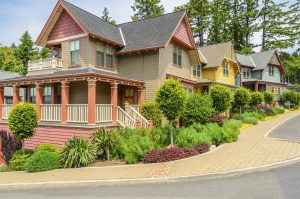 Existing-home sales dropped in April, despite the increase the market saw in the last two months, according to the National Association of Realtors.

Existing-home sales include single-family home, townhome, condominium and co-op transactions. The sales dropped 2.5 percent in April compared to last month. The seasonally adjusted rate decreased from 5.60 million in March to 5.46 million in April.

As a result of April’s decline, sales are 1.4 percent below last year and dropped year-over-year for two months.

“The root cause of the underperforming sales activity in much of the country so far this year continues to be the utter lack of available listings on the market to meet the strong demand for buying a home,” NAR Chief Economist Lawrence Yun said. “Realtors say the healthy economy and job market are keeping buyers in the market for now even as they face rising mortgage rates. However, inventory shortages are even worse than in recent years, and home prices keep climbing above what many home shoppers are able to afford.”

Despite the total housing inventory increasing by 9.8 percent compared to March to 1.80 million by the end of April, the total inventory is 6.3 percent lower than April a year ago. The median housing price rose in April to $257,9000. The price is 5.3 percent higher than it was in April 2017.

In April, properties stayed on the market for 26 days, which is 4 days less than March. The unsold inventory is currently at a 4.0 month supply pace.

Below are more trends from April: 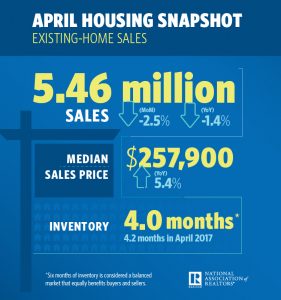