The Great Recession hit all generations hard, but now experts are finding that those affected by the recession are on the ups.

Millennials, Gen Xers, Baby Boomers and the Silent generations all experienced hardships as a result of the Great Recession that damaged the economy and created a housing crash from 2007-2010. A new report from Pew Research Center found each generation saw a rise in wealth throughout the following six years.

During the Great Recession, Baby Boomers’ net worth decreased by 26 percent, while members of the Silent generation only saw a 14 percent drop. Millennials, on the other hand, were hit the worst for employment, but according to the report faced little in wealth destruction because they had little to lose at the time.

As far as home equity, homeowners in the Gen X generation faced the largest decline, with the medium home equity dropping 43 percent to $37,600 from 2007 to 2010. Baby Boomers had a 28 percent decrease and the Silent generation had a 15 percent drop. But now, Gen Xers are the only generation to recover their home equity.

Home equity for Gen X homeowners doubled since the end of the recession. Compared to 2010 when 15 percent of homeowners owed more money than they owned, only 3 percent faced the same situation in 2016.

According to the report, “this improvement is due to lenders foreclosing on homeowners as well as appreciating home values and mortgage modifications. Still, reducing the ranks of homeowners with negative equity in their homes boosts wealth.”

Besides the home equity recoveries, experts attribute the success of the Gen X wealth recovery to their ages. Gen Xers are still in prime working ages, compared to Baby Boomers and the Silent generation, and they have higher household incomes.

Since 2010, the Gen X medium household income increased over 20 percent to $73,200 in 2016. Because of the prime working age of Gen Xers, with the oldest member being 51 in 2016, they still have years to continue working.  According to the report, the Gen X labor presence has been consistent since 2008, while Baby Boomers and the Silent generation workforce numbers have dropped because of retirements. 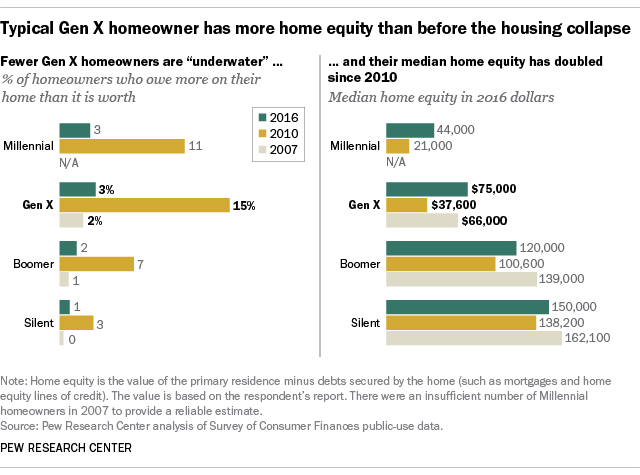