Generation Z is saving for homeownership by age 25 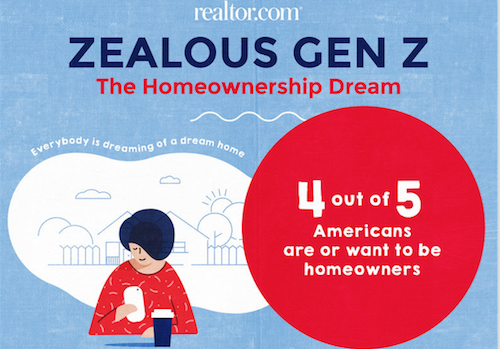 Generation Z is just starting to come into adulthood, but they are already preparing for homeownership, according to a realtor.com survey. The study found that those in Gen Z, those who are currently age 18 to 24, who are interested purchasing a home are two times more likely than earlier generations to begin saving for a home by the age of 25. In fact, two out of five of Gen Z-ers plan to own a home by that age.

Generation Z’s eagerness for homeownership coincides with previous generations. The study found that 79 percent of Generation Z respondents said they want to or already own a home, only a 3 percent difference from Generation Y’s and Generation X’s 82 percent each.

When asked about pursuing homeownership, 17 percent of Gen Z-ers  responded that they were open to or interested in future purchases, while only 13 percent of millennials, and 11 percent of Gen X respondents reported interest. The Gen Z surveyors who answered “yes” or “maybe” to purchasing a home were found to be over twice as likely, 74 percent, to start or have a plan to start saving for a home by the age of 25.

“Gen Z-ers don’t just want to become homeowners; they want to do it at a younger age and we found that they’re saving or planning to save for it accordingly,” said Danielle Hale, chief economist at realtor.com. “Their desire for homeownership may be similar to that of millennials and Gen X-ers, but graduating into one of the best labor markets in generations might give them the boost they need. Only time will tell if Gen Z-ers are able to achieve their ambitious goals.”

Other results about Generation Z :