Despite a quarterly decline in activity, Gwinnett was still the most-active metro-Atlanta county for homebuilding in the third quarter.

Gwinnett was once again head and shoulders above its neighbors in terms of housing starts, closings and lot deliveries, with Cherokee County coming in a distant second in all three metrics, according to a new report from asset manager and developer St. Bourke. 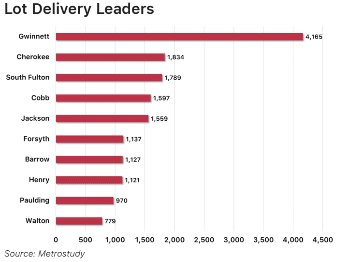 Of the 23 counties analyzed by St. Bourke, 19 experienced year-over-year declines in housing starts, and 15 saw declines in closings, while 12 saw lot deliveries decrease. Some counties saw dramatic swings in deliveries, with Rockdale, Bartow and Jackson seeing them surge more than 100% over the last year, and Carroll, Spalding and Dekalb seeing them fall by high double-digits.

“We are undoubtedly feeling the pinch of unaffordability, diminishing demand and sliding builder confidence; it certainly feels like we have fallen a long way from the chaotic and frenzied conditions we experienced in early and mid-2021,” the report states. “It is St. Bourke’s view, however, that the unsustainable level of home-price growth and inventory shrinkage during that period was doing more long-term harm than good to Atlanta’s housing market and that what we are feeling now is a temporary — and necessary — recalibration that will ultimately allow demand to rebound.”

By community, the list of top 10 performers in the third quarter was completely different from those in the second, as townhomes and communities more than 30 miles from the urban core became increasingly prevalent, at three communities and seven communities, respectively. Harmon Heights in Jackson County was the most active in the third quarter, with 148 annualized housing starts, followed by Carlton North, a townhouse community in Gwinnett County, with 85 starts.

By builder, D.R. Horton again led the way in the Atlanta metro, with 790 new-home closings in the third quarter, followed by Lennar Homes with 367 homes closed and Century Communities with 222.