Top 4 Strengths of the Atlanta Economy 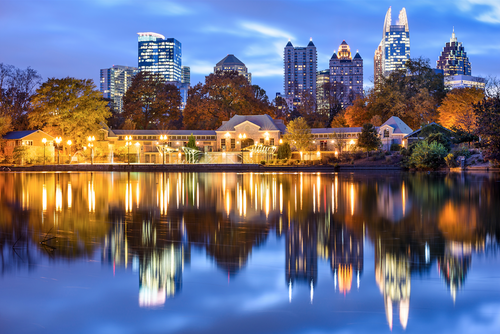 In recent years, Atlanta’s economy has been one of the fastest to rebound from the Great Recession. But what has driven this recovering economy? According to a recent study by PNC Financial Services, there are four large factors that keep Atlanta’s economy growing and strong.

Atlanta’s economic expansion is charging ahead as the nation’s economy improves. Because the Atlanta economy is so sensitive to macroeconomic trends, when rates of GDP increase nationally, the local area experiences faster-than-average job growth. A lot of this job growth occurs in high-tech and professional services, which are central to the local economy. Those fields and many others, such as education, healthcare and manufacturing, have all attracted out-of-state companies to relocate to Atlanta, according to PNC’s study. All of the jobs created by those relocations have caused Atlanta’s unemployment rate to sink to 5.9 percent, a full percentage point lower that last year.

Because of the large mix of jobs being created in Atlanta, average hourly earnings will grow over the next several quarters. PNC Financial Group’s study also showed that with the area’s low energy prices, disposable income will rise, and consumer price inflation will decline. Median household income in Atlanta is 7 percent greater than the national average, and the study credited the area’s highly educated workforce for that fact; more than 35 percent of adults over 25 in Atlanta have at least a bachelor’s degree, which is 6 percentage points higher than the national average.

According to PNC’s analysis, strong demand from real estate investors has caused a large decrease in foreclosed properties in recent years. That has resulted in smaller discounts on foreclosed properties, thus increasing prices overall. Although prices continue to rise, strong employment and income gains keep housing affordable. The study demonstrated that the median price for a home in Atlanta is 1.4 times the median income, lower than the national median home price, which is 1.7 times the median income.

Metro Atlanta’s growth has been enhanced by strong demographic trends. Increased relocation and more international migration have fueled Atlanta’s above-average population growth. The city’s population is also generally young. According to PNC’s analysis, one third of Atlanta’s population is between 18 and 34. Those trends support the demand for retail, construction, education and healthcare.