While homeownership continues to be a key part of the American Dream, minorities in the United States lag behind the rest of the country in homeownership rates. According to a new report from ABODO Apartments, a national apartment listing service, 46 percent of minorities own a home, significantly behind the national average of 63.1 percent.

The report analyzed information from the U.S. Census Bureau on race, ethnicity, and homeownership to see where minorities are buying homes and how ownership rates have changed over time. 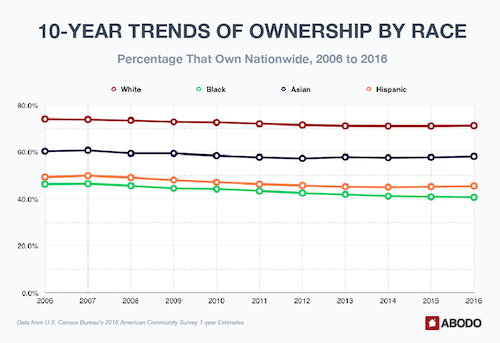 The metropolitan statistical areas (MSA) where the highest percentage of minorities own homes are mainly in the South, Southwest and West. Minority homeownership rates in all of these states are higher than 45 percent. The highest percentage was in McAllen-Edinburg-Mission, Texas MSA, where 64.3 percent of minorities and 77.7 percent of white residents were homeowners.

The MSAs with the lowest percentage of minority homeowners tend to be located on the East Coast, with the Scranton-Wilkes-Barre-Hazelton MSA having the largest racial disparity: only 28.6 percent of minorities there are homeowners, compared to 70.8 percent of white residents.

The Atlanta-Sandy Springs-Roswell MSA ranks at No. 58 among all cities in terms of minority homeownership. However, when looking at the 45 largest cities in the country, Atlanta comes in at No. 17 with 47.3 percent of minorities owning a home.

“When analyzed specifically by the largest minority groups in the country, the breakdown of homeowners is very interesting in Atlanta,” said Sam Radbil, senior communications manager at ABODO. “Specifically, 74.4% of white population own homes, while just 44.8% of African-American people own, 63.9% of Asian and 44.5% of Hispanic are homeowners. Clearly, all across the country, including Atlanta, homeownership among minorities is far behind the homeownership rates of white people.”