The market for townhomes and condominiums continues to be solid, with condos selling faster in 2017 than in 2016 despite low inventory, according to Engel & Völkers Atlanta’s annual market report. Between January and December of 2017, Atlanta townhome and condo sales increased by 37 percent, and the amount of days spent on the market dropped from 50 to 30.

Midtown condos led the pack with sales and prices compared to other parts of Atlanta. The average number of days a Midtown condo or townhome spent on the market dropped from 31 in 2016 to 28 in 2017, while the average ratio between listing price and selling price increased from 98 percent to 99 percent.

In the townhome market, new construction appears to be highly desired, with newly constructed townhomes selling out in The Aldredge, Arrington Place and Blackburn Row. Construction on townhomes is also prevalent across Reynoldstown, Cabbagetown, and along Memorial Drive, as well as the Eastside Trail Extension of the Beltline.

Luxury condos also saw a significant boom last year. Between 2016 and 2017, Engel & Völkers found that there was a 65 percent increase in condos that sold for over $1 million. Condos in the $2 million to $5 million range saw a 300% increase in sales.

Inventory remains low, with a supply of 2.3 months — attributed in the market overview to population growth and jobs coming into Atlanta without new inventory to keep up.

“We observed steady sales at a variety of price points throughout the year with particularly strong resale absorption in the market,” said President and CEO of Engel & Völkers Atlanta, Christa Huffstickler. “Inventory is tight and buyers are increasingly demanding homes in the city’s core, allowing amenity-rich, centrally located projects like Atlantic to thrive under current conditions.” 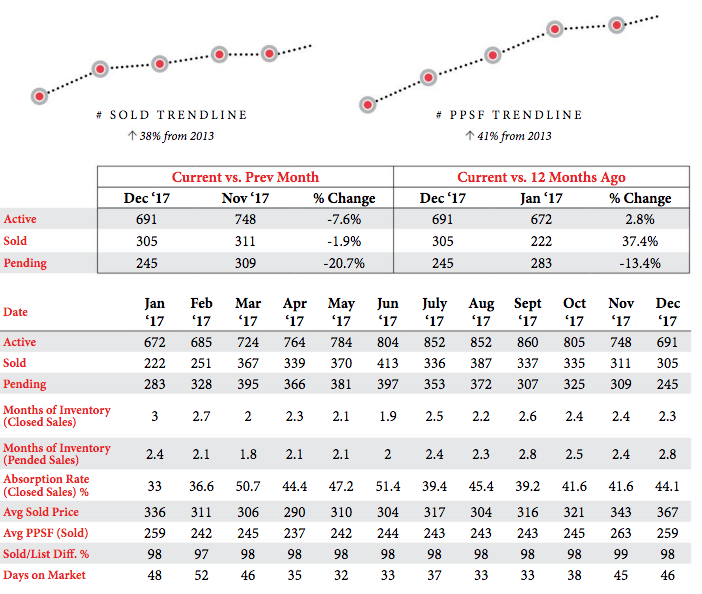