Atlanta ranks as one of the most sustainably powered cities The shift from non-renewable energy to sustainable power has been a slow process, but some cities are climbing faster than others, leading the country in green buildings and power. With Atlanta working to move toward 100 percent renewable energy, it is not surprising that it is near the top of the pack.

CommercialCafé ranked the the 40 most sustainably powered cities in the U.S. and Georgia steals two spots in the top 30. Atlanta ranks No. 20 with a score of 63.62 with Savannah close behind with a score of 54.63 at No. 28.

Scoring was based on a combination of point values granted to each city based on various emissions, green initiatives, alternative energy sources and more. Co2 emission score was the largest pool, with an inversely proportional number given from 0 to 30. Smaller point values stretched from 0 to 5 based on commuting figures such as walking and biking to work, energy sources such as biomass and hydroelectric and source reduction such as limiting oil, coal and nuclear use.

Atlanta’s strengths come from their building initiatives such as the new T3 building in West Midtown. T3 buildings focus on timber, transit and technology, located close to low carbon emitting transportation, built from sustainable materials and installed with green technologies.

Another large contribution to Atlanta’s score is the amount of EV charging stations in the city, outnumbering cities in the top five such as Portland, OR (No. 4) and San Francisco (No. 1). 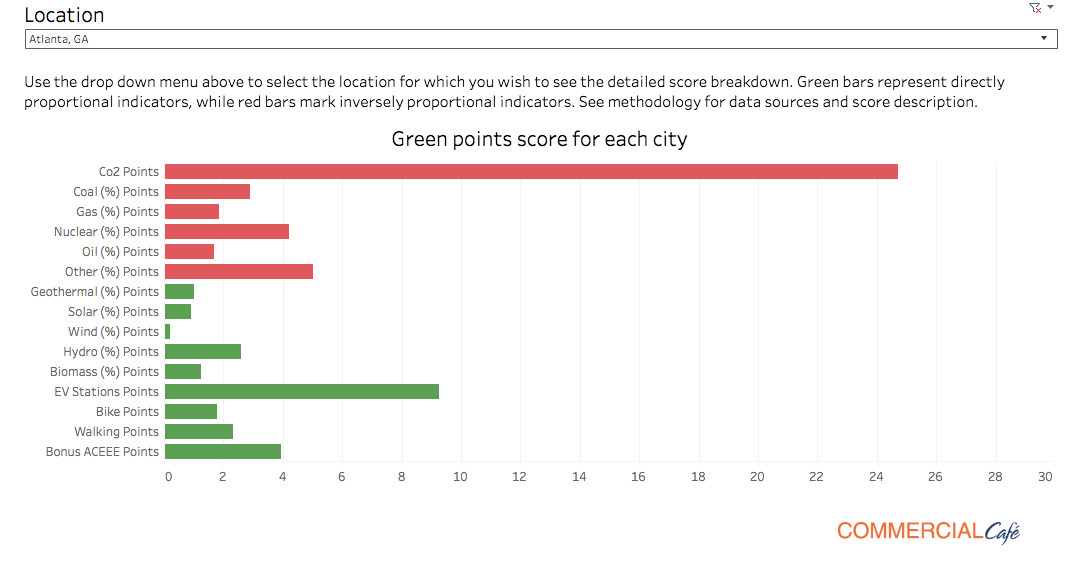 Specific point breakdowns of each city are available in the report.