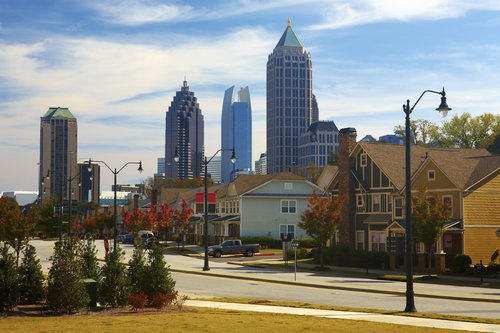 An innovative, walkable, $60 million, 281-unit development will soon rise next to SunTrust Park. Atlanta Business Chronicle reported that Atlanta real estate company Pollack Shores purchased over three acres from an affiliate of Pope & Land Enterprises this week. Site work could begin as early as the next few weeks. The new five-story apartment complex will overlook the Braves’ ballpark and mixed-use development, The Battery Atlanta, on an undeveloped property next to the former headquarters of Genuine Parts Co.

Haygood Avenue in Peoplestown was once a dead-end street full of debris and abandoned homes. Now it’s one of the hottest intown neighborhoods. Curbed Atlanta reports that almost every house on the block is under some phase of construction. With an unbeatable location, 1,800 square-foot homes with open floor plans are selling for $400,000 or more.

High-profile developments such as the Beltline’s planned Southside Trail, Grant Park and Summerhill’s Georgia Avenue are within a quarter of a mile from Haygood Avenue. The newly built, three-bedroom bungalow, which is listed for $493,000, borders D.H. Stanton Park and the future Beltline rejuvenation and comes with perks such as a nine-foot kitchen island and off-street parking.

Atlanta is a major hub for single-family home investors

A new story in the New York Times on the prevalence of investor-owned single-family houses focuses heavily on gentrifying Southwest Atlanta neighborhoods. The story profiles several new homeowners that have recently purchased homes, either as investments or to live in.

It focuses on the Adams Park neighborhood, noting that since the recession, investors, including major hedge funds, have increasingly bought up large blocks of single-family homes, contributing to today’s tight inventory for entry-level homes. Atlanta ranked sixth in the country for its share of single-family homes purchased by investors in 2018, according to the piece.

Recent statistics show that an acre of land in Midtown averages north of $10 million. Bisnow reports that Saint Marks United Methodist Church in Atlanta recently sold a portion of its campus to StreetLights Residential to develop a high-rise apartment tower that will loom over the historic church. Many other local churches have sold their properties to developers, including Friendship Baptist Church, which was used to develop Mercedes-Benz Stadium.

How can properties in Atlanta stand out among the thousands of new developments? No front door and spiked roof edges seem to be a good start. According to Curbed Atlanta, the 2,200-square-foot home known as Haus Gables was designed by architect Jennifer Bonner in 2018 and has been available to rent for $6,500 a month. A year after construction, local real estate firm Harry Norman Realtors is putting the door-less home on the market for $1.25 million.

Interested buyers will enter the home through an underground entryway that leads to the open floor plan. Located on an 18-foot lot, the house stretches upwards and consists of several platforms and staircases that lead into the gabled roof.