The future site of The Lodge on a recent afternoon.

A mixed-use development with 42 affordable-housing units and 33,000 square feet of office, retail and restaurant space is set to break ground on a busy but long-vacant corner on the border of Ormewood Park and East Atlanta Village.

The 525 Moreland project is an assemblage of eight properties on the southwest corner of the intersection of Glenwood and Moreland avenues, according to its website. Three of the five structures will hit four stories, with others reaching lower elevations. The centerpiece of the development will be the historic Masonic Lodge building that will be repurposed for commercial use, with a market/food component on the first floor in recognition of its original use as a Kroger grocery store. The master-planned project will also include a 5,000 square-foot plaza and a 7,500 square-foot green-space buffer with neighboring residences. 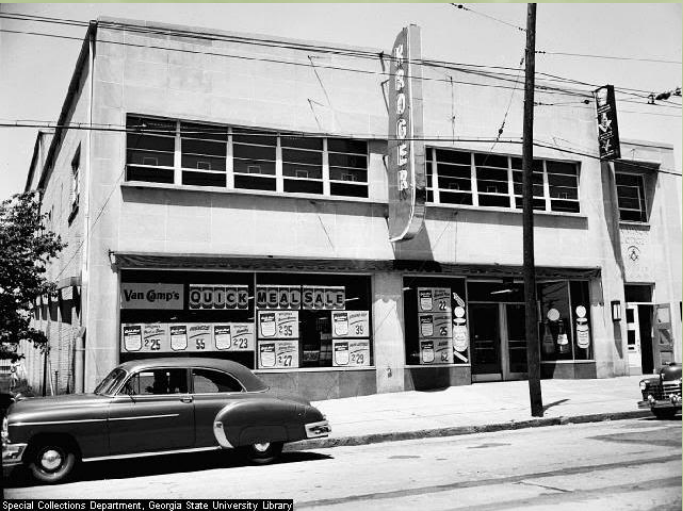 The residential portion will be known as the Abbington at Ormewood Park and target those earning between 30% and 80% of area median income, with a project average of 60%, while the commercial component will be called The Lodge in honor of the Masonic property.

Plans call for the demolition of three of four homes on the 1.59-acre assemblage to make way for vehicle access and parts of the residential segment. The fourth home, a 1,442-square foot property, will be turned into office space.

The redevelopment, plans for which have been in the works off and on since at least 2008, will proceed in tandem with the realignment of the busy Moreland-Glenwood intersection currently being undertaken by City of Atlanta Public Works and the Georgia Department of Transportation. The notorious intersection of Glenwood and Moreland requires separate light cycles for east- and westbound Glenwood because of its misalignment and has long been a nuisance for motorists and pedestrians alike.

Clark Property R+D and King Properties are leading the development of The Lodge, with assistance from Porch & Square and RAD Group, while Rea Ventures Group LLC is heading up development of the Abbington at Ormewood Park. Site plan for The Lodge and the Abbington at Ormewood Park, courtesy of 525 Moreland.