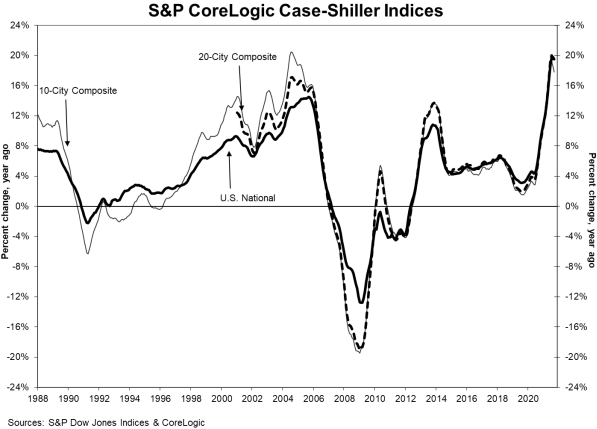 The heat of home-price increases cooled a bit in September, according to the S&P CoreLogic Case-Shiller U.S. National Home Price NSA Index, which registered a 1.2% seasonally adjusted gain from August and a 19.5% year-over-year increase, compared to August’s 1.4% monthly rise and 19.8% climb on an annual basis.

“If I had to choose only one word to describe September 2021’s housing price data, the word would be ‘deceleration,’” S&P DJI managing director Craig Lazzara said in a press release. “Housing prices continued to show remarkable strength in September, though the pace of price increases declined slightly.”

Home-price gains were broadly distributed, as all 20 cities in the index rose after seasonal adjustments.

Before seasonal adjustment, the the 10-city and 20-city composites posted increases of 0.7% and 0.8%, respectively.

Tampa and Miami, Fla., and Phoenix real estate claimed the largest price gains among the 20 metro areas in the index.