Selig Development and RJTR architects recently unveiled proposed designs for a pair of high-rise towers that would bring 465 apartments and more than 600,000 square feet of office space to Midtown. 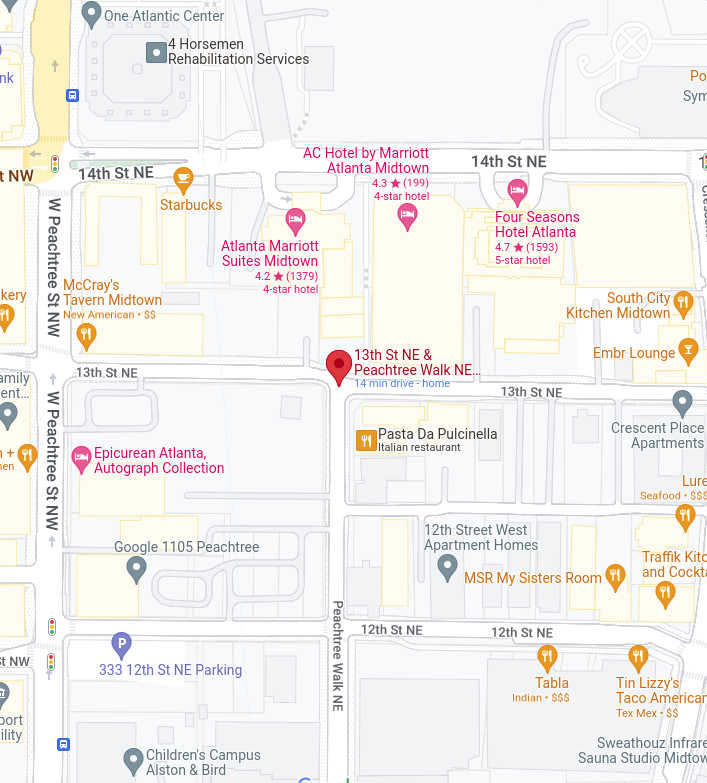 Midtown Exchange will be located on 12th and 13th streets and Peachtree Walk. Courtesy of Google Maps.

The mixed-use development, to be known as Midtown Exchange, is slated for the block bordered by 12th and 13th streets and Peachtree Walk. It includes a 37-story residential building on the corner of 13th Street and Peachtree Walk and a 26-story office tower on 12th Street. The two buildings would share a 10-story, 1,608-space parking deck and an internal courtyard.

The Midtown Development Review Committee, which must sign off on the project, offered numerous recommendations to the development partners, most of which relate to the parking deck, including reducing its size, re-examining its location relative to a residential building to the east and updating the eastern and western elevations.

The committee also asked the developers to reevaluate the courtyard’s internal focus to provide additional access from adjacent streets and the nearby Midtown Art Walk, a pedestrian promenade that will showcase arts, sustainable landscaping and unique lighting from the Fed Plaza at 10th Street to the Woodruff Arts Center at 15th Street.

The committee offered to help the development team revise the plans for approval at its next meeting in May.

As reported by What Now Atlanta, Midtown Exchange will be the second phase of Selig’s 1105 West Peachtree mixed-use development, which includes a Google-anchored office tower, a 178-room hotel and a condominium tower.