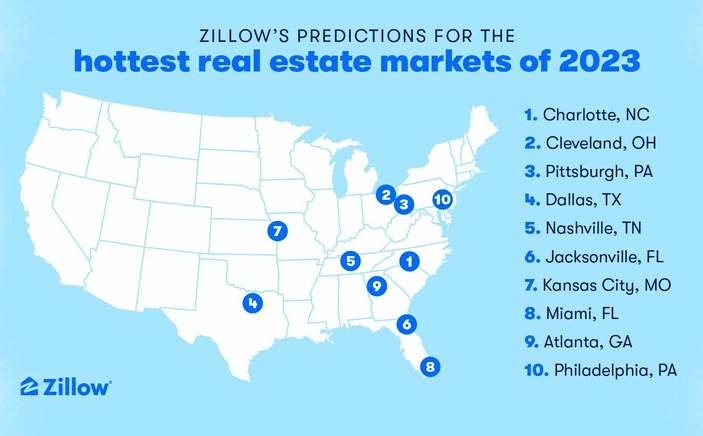 Atlanta ranked No. 9 in Zillow’s list of the hottest housing markets for 2023, joining other relatively affordable cities, which have attracted increased attention as home prices, interest rates and inflation have pinched buyer pocketbooks.

Charlotte, N.C., ranked No. 1 on the annual list, followed by Cleveland and Pittsburgh.

Unlike previous years, fast-rising home prices were not a requirement for this year’s list, although they were considered, as higher mortgage rates and “severe affordability challenges” have tamped down demand, as well as home values, Zillow said.

In conducting its analysis, Zillow considered expected home-price growth from December 2022 to November 2023, the anticipated change in home-value growth from 2022, new jobs per new housing unit permitted, an estimate of the net new number of homeowning households and the pace of home sales.

“This year’s hottest markets will feel much chillier than they did a year ago,” Zillow economic data analyst Anushna Prakash said in a news release. “The desire to move hasn’t changed, but both buyers and sellers are frozen in place by higher mortgage rates, slowing the housing market to a crawl. Markets that offer relative affordability and room to grow are poised to stand out, especially given the prevalence of remote work.”

The impact of affordability can be seen in both the cities that made this year’s list and those that didn’t. For example, last year’s hottest market, Tampa, fell to No. 11, and Austin, Texas, the hottest market for 2021, tumbled to 29th place, largely because it is now one of the most-expensive markets in the country. Atlanta ranked No. 7 in 2022. It was not in the top 10 in 2021.