Atlanta is one of the most popular cities for U.S. families to move to If it seems like there is an influx of people moving to Atlanta this summer, you are right. Atlanta ranked as the sixth most popular metro area for U.S. families to move over the summer.

“Every year, the summer months continue to be the most popular time to move,” said Melissa Sullivan, director of marketing communications for United Van Lines. “Throughout the entire year, United conducts more moves than any other moving company. This puts us in a unique position to use our data to observe migration trends from across the country — city-to-city and state-to-state.”

The most popular city for U.S. families to move to was Seattle, followed by Dallas and Portland, Oregon.  The cities that are seeing the highest influx of residents are located in the South and West, while the cities that are experiencing moving deficits are mainly cities located in the North. A recent report found that a significant number of Atlanta’s new residents are coming from cities such as New York and Chicago.

The Atlanta Regional Commission reported that more than 78,000 new residents came to Atlanta between April 2016 and April 2017, which is the fastest growth rate for the region since the Great Recession. 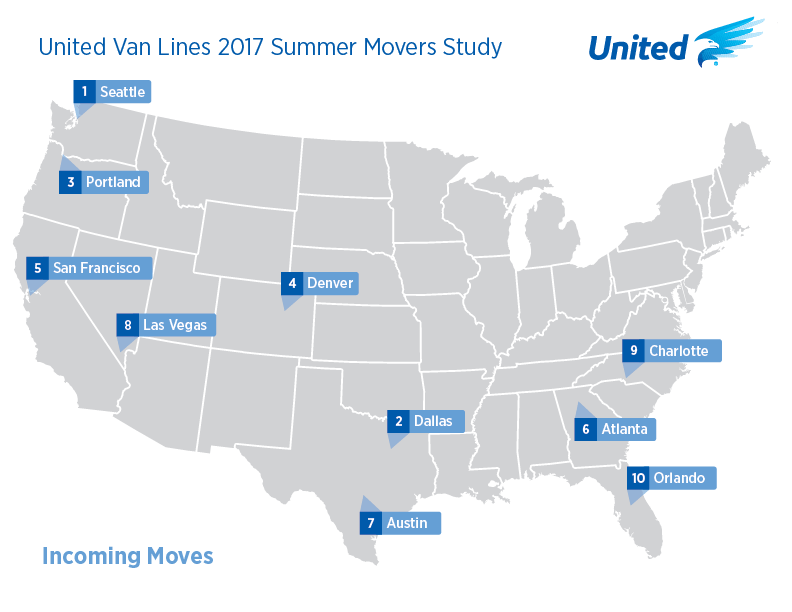