Fewer Atlanta homes sold, but pace and prices pick up 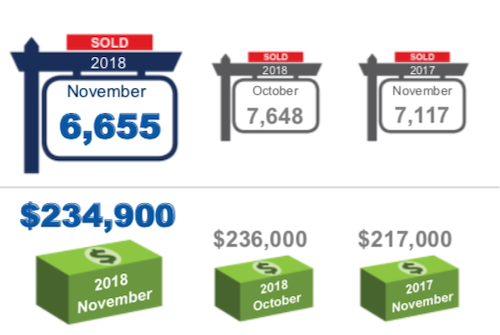 The number of sales this November may be down, but the Atlanta-area properties that are selling are going faster and for more money than they were last year, according to RE/MAX Greater Atlanta Area’s Housing Report, released Tuesday.

While home sales are down 6.5 percent year-over-year, median sales prices are up 8.3 percent. The average number of days from listing to signed contract is down by five from last year. As John Rainey, vice president of RE/MAX Georgia, points out, these numbers put Atlanta in a pretty competitive position nationally.

“The median sales price for homes in greater Atlanta grew at nearly double the national year-over-year average,” he says, pointing out that this is a long term trend as the last time the report’s regional median sales price grew at a rate that was slower than the national year-over-year average was all the way back in December 2017. Still, he notes that this rapidly-moving market does make it harder for first-time buyers and others who are sensitive to price: “Affordability continues to be a growing concern for many who are looking to purchase a home locally.”

Clayton County led the pack in terms of price gains, with an increase of more than 21 percent year-over-year. Gwinnett County was a distant second, coming in with an 11 percent increase. Torrence Ford, broker at RE/MAX PREMIER in Atlanta, says this sharp turnaround is due to some recent good news for the school system in Clayton. “The county’s schools recently regained their accreditation. This has greatly helped builders to come into the market and provide a much-needed product of affordable homes under the $200,000 mark,” Ford says. “The area is becoming increasingly popular for home buyers with young children.”