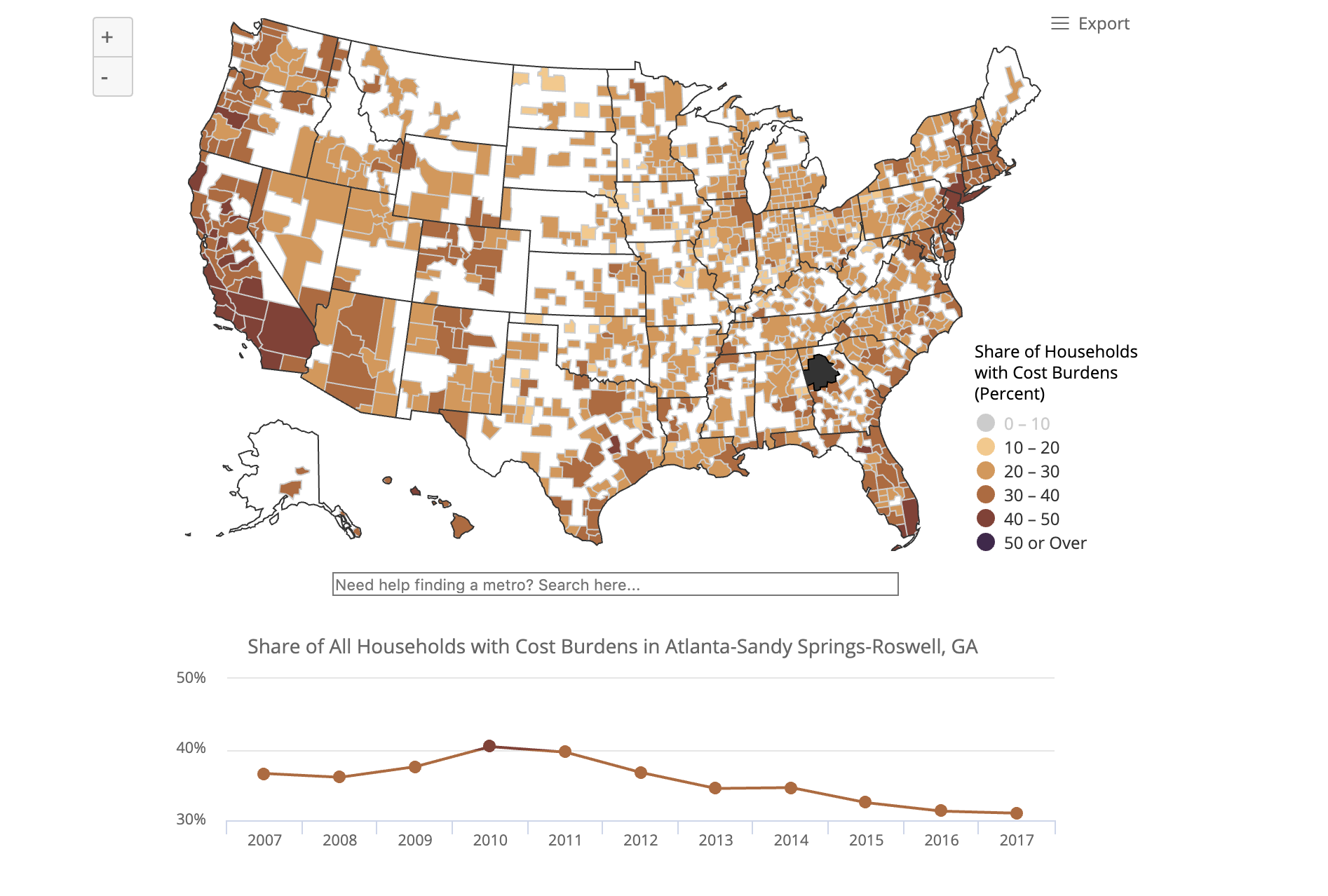 It’s no secret that monthly mortgage costs tend to be less than rent on average. But according to a new interactive map released by The Joint Center for Housing Studies at Harvard University, this differential is having a dramatic effect on the other side of the spectrum: housing affordability.

A map showing metropolitan statistical areas around the country looks at both the share of households that are burdened by housing costs (spending more than 30 percent of household income on their residence) and those who suffer severe burdens, meaning they devote more than 50 percent of their income to housing. The data, released as part of the organization’s 2019 State of the Nation’s Housing report, examines cost burden over a ten-year period beginning in 2007.

In Atlanta, 31 percent of homeowners were cost burdened as of 2017 (unchanged from the year prior), with about half of those—14 percent—being severely so. As for renters, 47 percent were considered cost burdened in 2017. Similar to the trend line for homeowners, the share of cost-burdened renters stayed about the same over the last year of available data, though it increased slightly for the severely cost-burdened.

Of course, some of the variation between owners and renters is no doubt due to the fact that renters tend to have lower incomes than homeowners overall. Indeed, the U.S. Census Bureau just released data indicating that homeowners’ median net worth is 80 times larger than renters’. According to the JCHS data, Atlanta homeowners on average make nearly twice what renters make, with an average household income of $81,000 to renters’ $43,000.

“In these metros with relatively low rents, cost burden rates were higher than the U.S. median of 47 percent even though median rents were lower than the U.S. median of $1,010,” Sean Veal, a research assistant at the center, wrote in a blog entry accompanying the release. “These metros illustrate how housing affordability for renters is not limited to the West and East coasts but transcends state lines to the South and Midwest.”

Homeowners appear to be getting a better deal on the cost of housing whether they’re in highly cost-burdened metros or not. While Atlanta owners do tend to pay more for housing than renters, the cost differential is much smaller: Renters pay a median housing cost of $1,104 every month, while homeowners pay $1,213 — only around 15 percent more.

And overall, residential cost burden for Atlantans has been steadily decreasing since the depths of the recession. While 31 percent of all households were cost burdened in the most recent data from 2017, that’s down notably from the 40 percent level in 2010, when the last downturn was being most acutely felt.