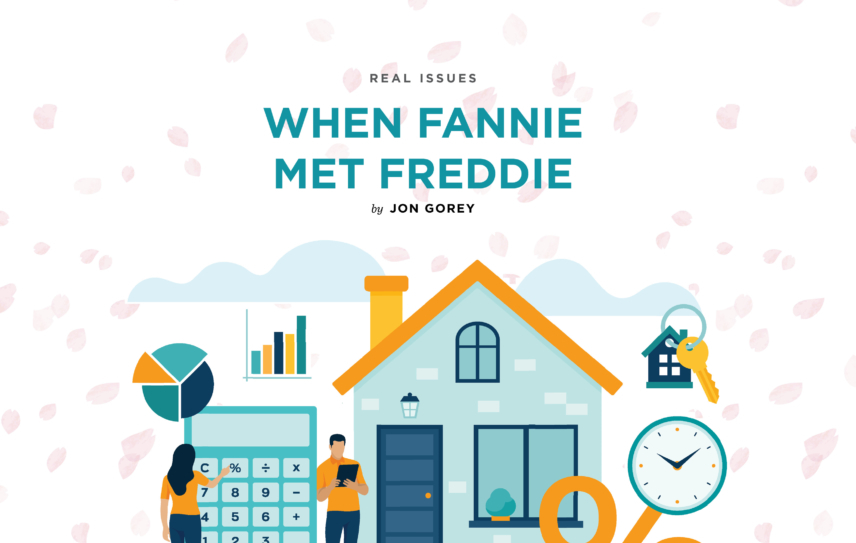 You may not give much thought to Fannie Mae or Freddie Mac — and ideally, you shouldn’t have to. The role of these government-sponsored enterprises, or GSEs, is to steady and strengthen the mortgage market from behind the scenes, buying loans from lenders and reselling them to investors around the world on the secondary market. That lowers borrowing costs and allows lenders big and small to write even more loans to U.S. homebuyers.

If Realtors, lenders and homebuyers are the stars of the real estate show, Fannie and Freddie are the unseen producers who bankroll the production from backstage.

As a real estate agent, your own success is at least partly tied to the fates of Fannie and Freddie: Nearly half of the 5.64 million homes sold in America in 2020 were purchased with a mortgage backed by Fannie Mae (1.5 million) or Freddie Mac (1.13 million). Together, the two account for more than $5 trillion in residential mortgages.

And right now, their future is far from certain.

In Sickness and in Health
The colossal nature of the GSEs make them easy to take for granted. But before Fannie Mae was established in 1938, there was no such thing as a 30-year, fixed-rate mortgage, and the U.S. homeownership rate was less than 50%. “The GSEs have been around a long time, but they’re not ever-present in history,” said Bernard Fulton, senior policy representative at the National Association of Realtors. “They’re absolutely critical to the homeownership rate in America, and the job creation that supports,” he added. “Without them, our market is significantly smaller, maybe catastrophically smaller for some businesses.”

Enshrined in the missions of Fannie Mae and Freddie Mac is an obligation to ensure that low- and moderate-income Americans have access to affordable home financing — even during difficult market conditions. That’s one reason the GSEs accounted for more than 60% of mortgages issued in the second and third quarters of 2020, according to the Urban Institute: As private capital pulled back during the severe pandemic-induced downturn, Fannie and Freddie were there to backstop one of the lone bright spots of the COVID-19 economy.

“Fannie and Freddie are there to provide liquidity to the market through all parts of the cycle,” said Dan Fichtler, associate vice president of housing finance policy at the Mortgage Bankers Association. While other sources of capital might come and go as market conditions shift, he said, the GSEs operate in good times and bad — in (economic) sickness and in health. “Fannie and Freddie are there to purchase these loans at all times, in good or bad markets. And so in that sense, perhaps they’re most important when they’re serving in a counter-cyclical role.”

It was the last devastating downturn that left the GSEs in the state of limbo in which they exist today. With property values plummeting and foreclosures mounting in 2008, the flailing GSEs were put into government conservatorship to help restore faith in the cratering mortgage market. Whether in spite of or because of their immense importance, their fate has been in flux ever since.

Public, Private, or Something In Between?
Conservatorship was never intended to be a permanent arrangement. While there was always an implicit assumption of government support behind them, the GSEs were once independent, publicly traded companies. But under conservatorship, taxpayers now bear the risk of those trillion-dollar balance sheets, and until very recently, Fannie and Freddie’s profits went straight into government coffers. (And the GSEs have both been quite profitable in recent years, enough to pay back their 2008 bailout and then some.)

The Trump administration early on declared its intentions to re-privatize Fannie Mae and Freddie Mac. But it’s difficult to gracefully offload a $5.5-trillion mortgage mammoth without creating a disruptive splash in the housing market and the broader economy — an outcome Treasury Secretary Steven Mnuchin was keen to avoid.

The Trump-appointed director of the Federal Housing Finance Authority (FHFA), Mark Calabria, has made it clear that he still wants the GSEs to exit conservatorship sooner rather than later. In January, during the last days of the Trump administration, the FHFA and Treasury Department announced a set of changes to the rules governing the GSEs’ conservatorship — among them, allowing Fannie and Freddie to build up capital by holding onto their earnings.

That puts the GSEs on track to meet an important condition of ending their conservatorship: They must have north of $200 billion in combined capital on hand — enough to sustain losses during a downturn — before they can stand on their own again.
Almost everyone involved agrees that allowing Fannie and Freddie to keep more of their earnings, and to build up a nest egg of capital, is a good thing. “That makes them steadier, safer operating entities,” argued Don Layton, a former chief executive of Freddie Mac and senior industry fellow at Harvard’s Joint Center for Housing Studies. “It means there’s more capital to absorb losses ahead of the taxpayer,” he said, and will likely make easier whatever the Biden administration or a future one decides to do with them.

However, the GSEs currently hold only about $41 billion in combined capital. “If Fannie and Freddie were to go from where they are today to eventually reaching those required capital levels purely based on their retained earnings, it would take quite a while — many, many years,” Fichtler said. “Where they’re potentially able to raise larger chunks of capital would be through the public markets,” he added — in other words, a stock offering to investors. That’s an idea that Director Calabria has floated as recently as January. “Until the enterprises can raise private capital, they are at risk of failing in the next housing crisis,” he forewarned in a statement.

But while Calabria remains atop the FHFA for now, any privatization push would need the unlikely approval of the new Secretary of the Treasury, Janet Yellen, and most experts suggest that President Biden will be able to replace Calabria later this year. And with the twin crises of a pandemic and battered economy demanding immediate action, rushing Fannie and Freddie out of conservatorship hardly appears to be a priority for the Biden administration.

Small Changes With Big Impacts
In fact, while conservatorship was intended to be a short-term solution, Layton said, “It certainly is doing better long-term than anyone expected.” Couple that with the unglamorous politics involved, and Layton anticipates more of the status quo this year. “It’s such a heavy political lift to exit conservatorship,” he said, “that my expectation is the GSEs will continue in their current form, though better capitalized, for at least the next few years.”

As well as it’s worked so far, Fulton noted that getting the GSEs out of conservatorship is an end goal that just about everybody shares. “The beauty of shareholder incentives is that the GSEs stay on the cutting edge of the business in everything from information technology to identifying mortgage markets and safety and soundness,” Fulton said. “It’s, ‘What are the conditions after they’re released from conservatorship?’ That’s where there’s some debate.”

NAR would like to see Fannie and Freddie managed as regulated utilities — independent, shareholder-owned companies that provide an essential public service and are thus subject to rigorous regulation. “The utility model means that the GSEs should be regulated to mission,” Fulton said, prioritizing the health and affordability of the mortgage market, “rather than what had happened before, where they managed to the bottom line, took some unnecessary risks and jeopardized that mission.”

The Mortgage Bankers Association has also supported a utility approach. Near-term, though, Fichtler suspects we’ll see more incremental changes. “Oftentimes when people talk about GSE reform, they think about Congress, and a big piece of legislation that would reshape Fannie and Freddie,” Fichtler said. But another avenue, he says, one that’s been incremental but successful over the past decade, is administrative reform. “That’s just kind of a fancy way of saying steps that FHFA and Treasury have taken over these last five-plus years to improve the operations and the safety and soundness of the GSEs outside of the legislature,” he said.

The financial crisis made clear that certain reforms to the GSEs were desperately needed, Fichtler remarked. “Some of those reforms have already been instituted over this last decade-plus,” he said. “So, in a lot of ways, Fannie and Freddie are already operating in a much better and much safer capacity than they were in the lead-up to 2008, without Congress having passed major legislation on this front.”

So, Realtors would do well to keep an eye on Fannie Mae and Freddie Mac and to advocate for a strong utility model for the GSEs going forward, Fulton said. Because while all these ifs and maybes might seem inconsequential, when something controls nearly half the mortgage market in America, even a small change can have a big impact on the industry.

“When there are changes to the GSEs, whether that’s changes to their business models, changes to types of loans that they’re allowed to acquire, those changes all have the potential to have a major impact in the primary market,” Fichtler said.

“It dictates what types of products lenders will be able or willing to offer, it impacts the interest rates that borrowers receive on their loans, and that means it impacts supply and demand in the market as well,” he added. “So, changes that maybe seem esoteric can flow through into the primary market and have a big impact on Realtors, borrowers, lenders and all the other participants in that market.”

The do’s and don’ts of dual agency

Opinions are not defamatory, but facts are: How to fight back against a bad online review