Atlanta’s public transportation has needed support for a number of years. And with the MARTA system seeing a significant increase in both usage and strain in 2017 after the I-85 shutdown, the 2016 referendum that allowed a half-cent sales tax increase to raise $2.5 billion for transit over 40 years is just in time.

Streetsblog USA recently looked at the proposed projects eligible for funding, which covers more than $6.3 billion in capital projects and $4 billion in operations and maintenance, and gave Atlanta’s transit plan a B+.

The website determined that the city has a number of clear goals, including “delivering fast transit, serving the city equitably and spurring walkable development.” It also has plans for expansion projects that will affect denser neighborhoods and employment areas.

However, the main flaw with the current plan is that the half-cent increase will not produce enough revenue to create a quality transit system for the entire city. The website found that if the city used all of the money raised toward operations alone, it would still be behind comparable cities like Denver and Minneapolis and significantly lacking compared to cities like Boston and Seattle. 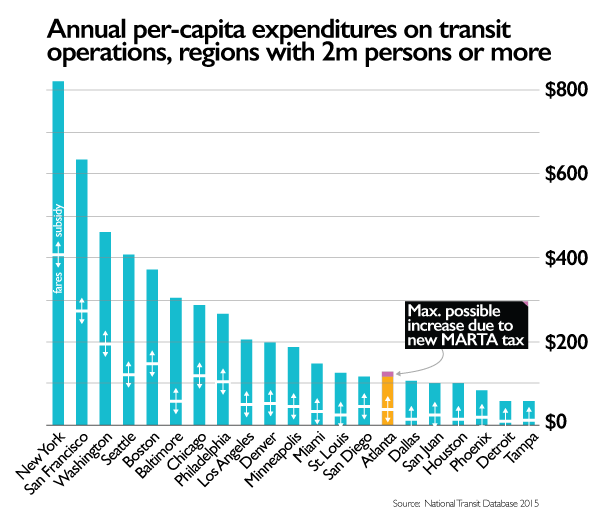 Also, projects like the BeltLine don’t impact as many residents as other projects that do not have the same level of name recognition. For example, the website found that the Capitol Avenue and Irwin-AUC light rail lines impact the highest number of people per line-mile. However, overall, Streetsblog found that Atlanta is moving in the right direction by expanding its current system to include more rail and bus service throughout the city.