MARTA is hoping to receive federal funding in order to extend the blue line in order to serve residents as far east as Stonecrest Mall.

According to a report from WABE, MARTA is compiling information on the expansion to submit to the Federal Transit Administration by spring 2018. It hopes to receive federal funds to cover up to half of the cost of the rail expansion project.

MARTA says that the project is “intended to improve east-west mobility and improve accessibility to residential areas and employment centers along the I-20 corridor east of the city of Atlanta.” It will also close a gap in the system by providing a link to downtown Atlanta for residents in Atlanta and south DeKalb County.

The plan would extend south down Interstate 285 before heading east along Interstate 20. And add five stops past the Indian Creek station: Covington Highway at I-285, Wesley Chapel, Panola Road, Lithonia Industrial Boulevard and the mall at Stonecreek.

Although it costs around $250 million per mile for heavy rail, MARTA assistant general manager Ben Limmer said he believes that this would be the best solution in order to expand the public transportation options farther east.

“It’s more feasible to extend the system that we already have to serve south DeKalb County as opposed to switch technologies to a light rail system,” Limmer said to WABE.

An assessment by Streetsblog USA earlier this year looked at Atlanta’s transit expansion plans and found that one of MARTA’s major goals should be to focus on building transit where people will use it, improving service equitably, creating faster transit and shaping future growth.

However, there are some concerns that there would not be enough demand in that part of the city to warrant the cost of expanding the heavy rail line toward Stonecrest. Joseph Hacker, a professor at Georgia State in the Department of Public Management, said MARTA should run buses along the route to get a sense of the demand in the area and to raise awareness to public transportation options. 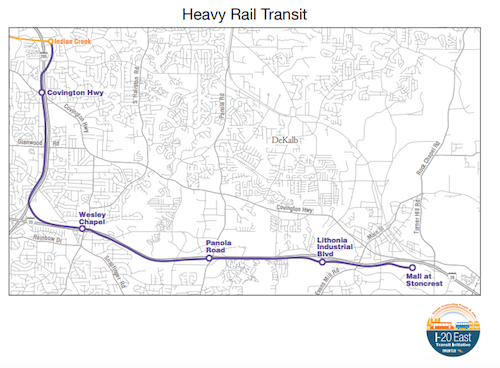