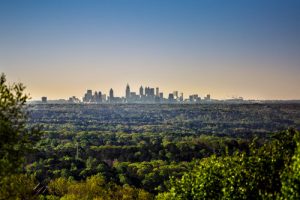 Planned are 10 residences—one per floor—each with three bedrooms, four bathrooms and a private terrace of approximately 475 square feet, reported Curbed Atlanta. These rare luxury condos are not officially on the market, but prices start at $2.1 million, not including HOA fees. Residences will feature 10-foot ceilings, floor-to-ceiling windows in the living areas, hardwood floors, and chef’s kitchens.

Ten Park East is the first high-rise condominium building on the Eastside BeltLine. According to development plans, the first two floors will feature a fitness center, a boardroom and micro offices, as well as bike storage, while the top of the tower will include a rooftop SkyPark with a dog park, outdoor lounge and kitchen, a plunge pool and more.

A dormant strip of shopping center on Alpharetta Street in downtown Roswell is scheduled for a make-over that will be completed in 2021. According to an AJC report, the sprawling $100 million mixed-use project, proposed as the Southern Post project, will include 70,000 square feet of office space, 50,000 square feet of retail space, 128 apartments, a parking deck, fitness facilities and a grocery store.

The project is expected to be built by mid-2021, with townhomes at Southern Post to be priced between $650,000 and $850,000. Southern Post is located a short walk away from a Canton Street, a bustling stretch with cottage-style homes that have been converted into restaurants and shops.

While some residences are excited about redevelopment, others have concerns for the small-business community. The Atlanta Journal-Constitution quoted City Administrator Gary Palmer saying that city leaders are “respectful of some of [those business owners’] needs, and we’re working with them on the transition.”

Atlanta housing market outperforms most regions in the United States

The AJC reports that home prices in metro Atlanta are up 4.9 percent over last year, outpacing most regions of the country. According to S&P CoreLogic Case-Shiller Index, which tracks the resale of homes, Atlanta has fared better than 16 of the 20 largest metro areas. This data shows that Atlanta’s increase was the fourth largest in the country over the past year.