It all started on March 11 with a tickle in the back of Juli St. George’s throat. 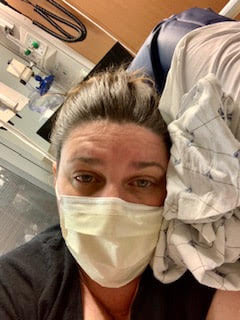 It was nearly two weeks prior to Mayor Keisha Lance Bottoms announcing Atlanta’s 14-day stay-at-home order. The Bradford Pear trees were just beginning to bloom, and St. George — a 45-year-old mother of two and leader of The Perfect Property Real Estate Team at Keller Williams Intown — thought it might be seasonal allergies. The next day she woke up with a fever.

“I was in the middle of a broker’s license class,” she said. “I went home, and Thursday and Friday I didn’t feel great, and by Saturday I was pretty sick.”

That’s when the panic started to set in. She was beginning to have trouble breathing due to the mounting pressure in her chest. By early Sunday morning, St. George could barely get a deep breath. Terrified, she drove herself to a nearby emergency room with a fever of 103 and a persistent cough. “I was coughing nonstop and having trouble taking a breath,” she told Atlanta Agent between a flurry of coughs from her home, where she is still recovering.

Upon arrival, she was led to a sequestered room where she was given tests to detect the flu and COVID-19. She was also given a chest X-ray, she said. That’s when she learned that the bottom part of her lungs had started to collapse. “The doctor said, ‘You have a textbook case for COVID — if there was a textbook for it,’” she recalled.

Despite her seemingly dire situation, St. George was not in need of a respirator to breathe and was sent home to enter self-imposed quarantine. “I was sick, but not sick enough to be admitted because I could still breathe on my own, thank God,” she said.

For the next 18 days, St. George was in isolation at her home with a nebulizer to help regulate her breathing. “You could hear the crackle in my lungs with every breath I was breathing,” she said. 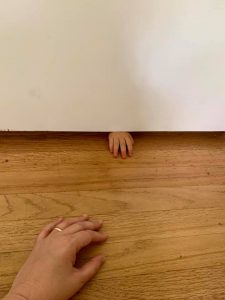 St. George’s toddler reaches under the door where her mother is in quarantine while she fights the virus. (Photo provided by Juli St. George)

She just came out of quarantine on March 30, but has been busy for the last week and a half on Facebook sharing her story with thousands of people across the country. The post made St. George a resource of sorts for real estate folks and others who are showing symptoms or just generally worried about the pandemic. “I have held off posting this for several reasons but I think it’s time you hear it from someone you know. The coronavirus is not a joke. It’s not a funny meme, and it’s not something you should take lightly,” she wrote in a public post on March 20 that has been shared more than 5,600 times.

She continued with her stark warning to others: “I have been in our guest room with my doors locked (since my 5-year-old really wants to visit me.) I can hear [the kids] playing in the yard and know that they are thriving and enjoying life right now. I can FaceTime with my family, but talking brings on more coughing, so the calls are short. The coughing is relentless. I mean, it just doesn’t stop. I’ve never smoked and have been healthy so far. It sounds like a bunch of locusts are living in my lungs.”

St. George wrote in the post that several friends and colleagues have contacted her and her family over the last few days to try to help. Her response to them: “What you can DO for me, however, is STAY THE F* HOME and spread this message to folks who aren’t taking it seriously, or maybe think that they won’t get sick.” 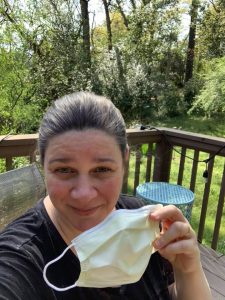 St. George emerges from the guest room of her home after more than two weeks of quarantine. (Photo provided by Juli St. George)

She has continued her updates on social media and was featured in a Fox 5 Atlanta news feature about the spread of the virus. She added that the Keller Williams community has shown support from all over the country during her two-and-a-half weeks in quarantine. “People from all over the country have been sending us wishes and prayers and well-being thoughts,” she said.

She emphasized that her story is “not a cautionary tale but an absolute warning.” St. George has already drastically changed her business practices by not having agents meet face-to-face with clients and providing walk-throughs, listings and appointments via videoconferencing. “I’m one of the lucky ones; I was able to beat it and get better,” she said. “I don’t know how long I will have lung issues, but I’m very thankful I’m able to get better and start to heal because not everyone is going to be so lucky.” 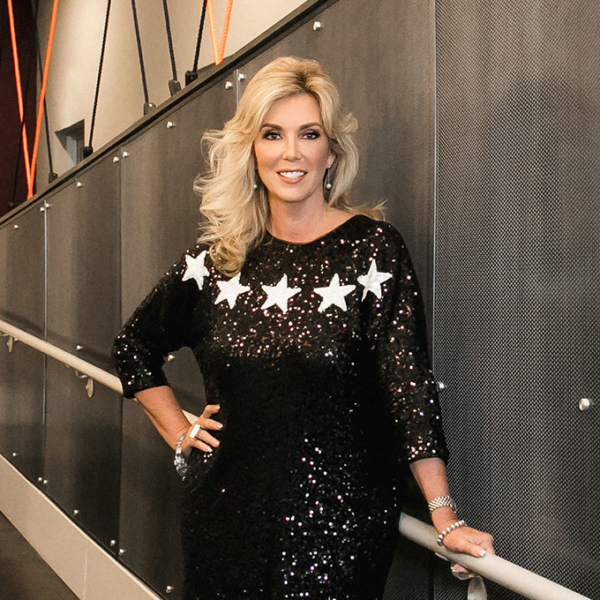