$43 Million Expansion of Beltline Kicks Off at Adair Park 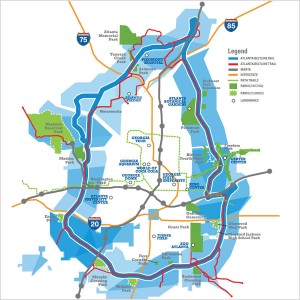 Map of the Atlanta Beltline system.

The city of Atlanta kicked off the most ambitious expansion yet for its Beltline system, a comprehensive infrastructure project aimed at connecting Atlanta’s various neighborhoods via walkable trails.

According to a report by Decaturish, the “Westside Trail,” as it’s called, will create a three-mile corridor from Allene Avenue to Washington Park (near the Ashby Marta Station). The two-year project will cost $43 million, with $18 million of the funds coming from a TIGER V grant from the U.S. Department of Transportation; $15 million from state/local funds; and $10 million from private donations.

“[The Westside Trail] is going to power families and communities to come together and be stronger,” Mayor Kasim Reed told Decaturish. “It’s going to connect people, connect schools, connect people to jobs … So just the fact that we’ve broken ground will encourage people to come out and visit. Investment will come, I think jobs will be created, new restaurants, new shops and I think there’s going to be a higher quality of life.”

The Westside Trail will also connect to four neighborhood schools and four parks, and will have 14 different access points; in addition, there will be 40 acres of green space along the route, including hundreds of native trees.

Thus far, $775 million has been spent on redevelopment within a half mile of the Eastside Trail, a testament to the popularity of the project; indeed, Marc Nicholson, the lead agent of the Remarcable Real Estate Team and an associate broker/owner of Keller Williams Buckhead, said he’s seen the Beltline create considerable demand for homes in the market.

“Now, you can walk from the Intown neighborhoods – areas that had gone into great decay – to Piedmont Park, and you have the city investing in construction projects to build on that belt-line,” Nicholson told us. “You have skate parks, walkways – many other cool, inner-city projects.”