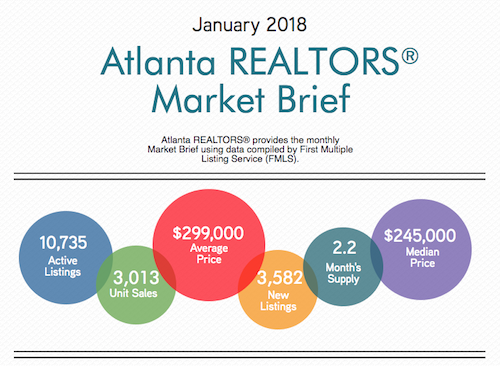 Home sales in Atlanta started off on a softer note, according to the January 2018 Market Brief from the Atlanta Realtors Associations.

Tightening inventory continues to be largely responsible for low sales and rising prices throughout Atlanta. The ARA reports that housing inventory dropped 27 percent year over year to 10,735 homes. New listings were down 12.7 percent to 3,582 homes. Meanwhile, the month’s supply dropped from 2.4 months to 2.2 months.

“Home sales began the year on a softer note, but January had a previous 12-month period of exceptional sales from new buyer demand,” said ARA President Bill Murray. “However, new listings generally aren’t keeping up with what is sold very quickly, moving the year-over-year prices up in face of this tightening housing supply of just 2.2 months of inventory.”