Why are Atlantans putting less money down? 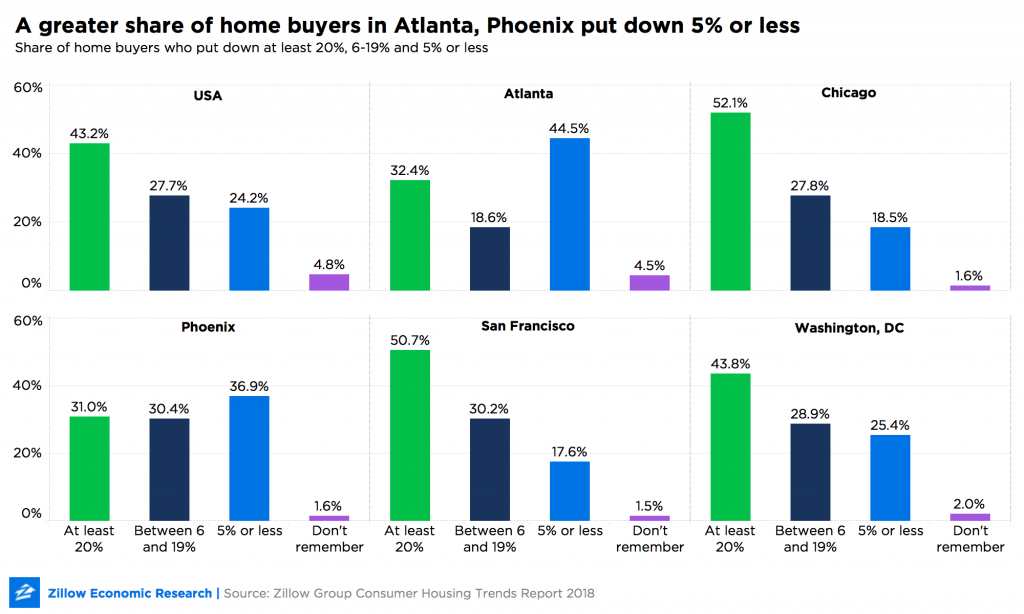 Saving for a down payment remains among the biggest hurdles to homeownership, especially for young or first-time buyers. But it seems down payment expectations are changing, including the long-held 20 percent standard.

Less than the national average

The trend toward smaller down payments appears to be even stronger in Atlanta. The Zillow study found 44.5 percent of Atlanta home buyers put down 5 percent or less, compared to 24.2 percent in that down payment bracket nationally. Of the markets studied, Atlanta had the second-smallest share of buyers who put down the traditional 20 percent when they bought a home: 32.4 percent of buyers, second only to Phoenix.

Other recent studies suggest younger buyers are having the hardest time securing down payments in the traditional 20 percent arena. Research from Apartment List estimated that if housing costs, wage growth and savings rates remain at current levels, it could take more than 20 years for the majority of millennial renters in the U.S. to save for a standard 20 percent down payment. Considering the demographics of Atlanta, age could be a factor. A recent Pew Trusts study commissioned by POLITICO found that 20 percent of Atlanta residents fall between the ages of 25 and 34, placing it at number 12 on their list of cities in terms of its proportion of millennials.

But why do Atlanta buyers have better luck securing a mortgage with such low down payments? One reason may be the many down payment assistance programs available in Atlanta, such as HOME Atlanta 4.0, and throughout Georgia, including the Georgia Dream program. Many of these are geared toward first-time buyers and are one way to secure a mortgage with a low down payment. On a national level, Georgia ranks ninth in terms of the number of down payment programs available to residents, according to Down Payment Resource’s most recent Homeownership Program Index.

“Georgia is typically in the top ten,” said Tracey Shell, the Atlanta-based company’s vice president and director of marketing communications. She also noted that the state’s relatively reasonable home prices might mean more potential buyers can utilize Federal Housing Administration loans, which allow anyone with a credit score of 580 or higher to put as little as 3.5 percent down.

Where the money comes from

Zillow’s survey also asked buyers how they funded their down payments. Across all markets and nationally, the most common source of down payment funds was cash savings, with 73 percent of Atlantans saying they planned to go that route. Of the five major markets Zillow compared, Atlanta boasted the highest percentage (33.4) of buyers who said they planned to get some help from family or friends.

Notably, the proceeds from a previous home sale were cited the second-most as funding sources in all but two metros, Phoenix and San Francisco. With 34.4 percent of buyers in Atlanta saying that their down payment was funded by a previous home sale, it could explain why first-time homebuyers struggle to afford down payments. Nationally, first-time homebuyers put less down than their more experienced peers. According to the National Association of Realtors’ 2018 Profile of Home Buyers and Sellers, while buyers overall this year made a down payment of 13 percent typically, first-timers put a median of 7 percent down.

The source of down payment funds also depended on where the purchase itself was located. In urban areas, homebuyers reported a more diverse mix of down payment funds, with at least half drawing from investments, gifts, a previous home sale or loans from a family member or friend. In suburban and rural areas, though, cash savings were by far the top choice, with alternative sources being reported much less frequently.