Atlanta Has One of Nation’s Highest Rates of Gentrification

Atlanta, according to a new study, is gentrifying more than nearly all U.S. cities. Gentrification is a topic of focus for many cities across the U.S., but a new analysis from Governing has found that few cities have been more radically altered by gentrification than Atlanta.

According to Governing‘s report, Atlanta has the fifth-highest rate of gentrification in the nation, with only Portland, Washington D.C., Minneapolis and Seattle seeing greater levels of gentrification, among the 50 that Governing analyzed.

The specific numbers in Atlanta are quite striking. As CL Atlanta spotlighted, just 17 percent of Atlanta’s neighborhoods – places like Cabbagetown, Old Fourth Ward and Reynoldstown – were gentrifying in the ’90s. In the last 15 years, though, Governing found that share has risen to 46 percent of Atlanta’s areas, with places like Cascade Heights, East Atlanta, Edgewood, Kirkwood and Lakewood Heights now joining the fray; compare that to the fact that nationwide, only 8 percent of neighborhoods have gentrified since 2000, and you get the idea of what’s happening in Atlanta.

Here are a couple maps, courtesy of Governing, that drive home the radical change: 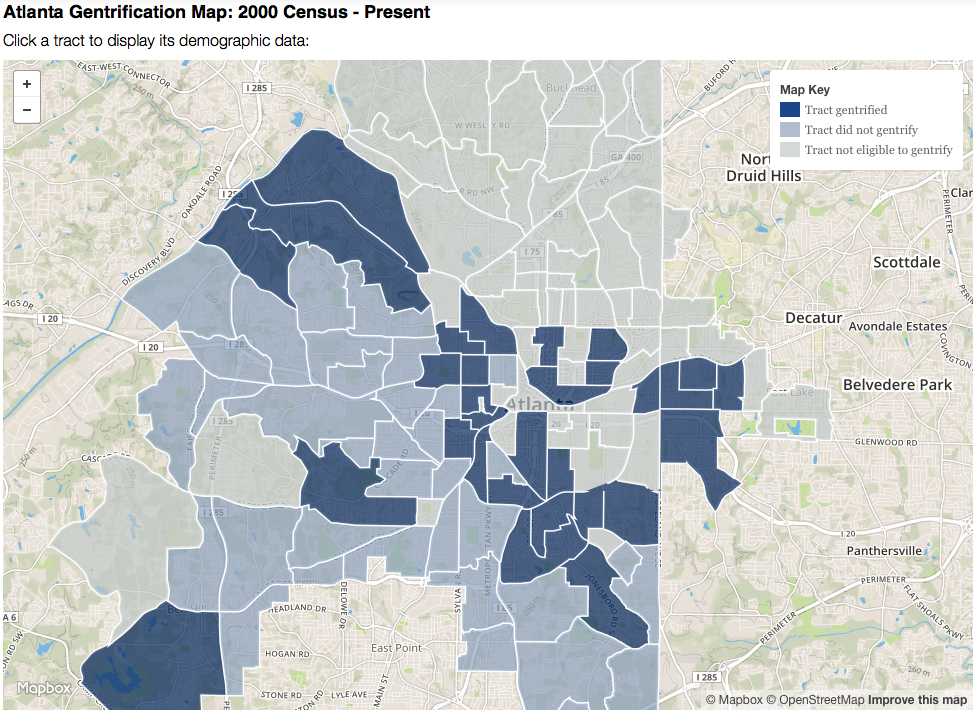 What are the Causes of Atlanta’s Gentrification?

So what’s behind Atlanta’s radical gentrification? Simply, a more educated and affluent – and yes, predominantly white – group of residents have begun moving back to those neighborhoods, many of which had been predominantly African American for some time.

There are definite benefits to those trends – for real estate agents, the rising prestige in gentrifying areas guarantee a much larger piece of business – and the higher property values grant the city a larger tax base.

What those trends do not necessarily help, though, are the lower-income residents native to those areas, and Oakley stresses that Atlanta may not have the necessary tools to deal with those issues.

“City Hall can say we’re [boosting workforce housing],” Oakley told CL. “But it’s not going to solve the problem. When neighborhoods start to gentrify, it’s a growth machine. Once private capital comes in, it’s impossible to stop it without rent control like in New York City. There’s no way that’ll happen in Atlanta.”